Is Biglari Holdings Inc (NYSE:BH) a good bet right now? We like to analyze hedge fund sentiment before doing days of in-depth research. We do so because hedge funds and other elite investors have numerous Ivy league graduates, expert network advisers, and supply chain tipsters working or consulting for them. There is not a shortage of news stories covering failed hedge fund investments and it is a fact that hedge funds’ picks don’t beat the market 100% of the time, but their consensus picks have historically done very well and have outperformed the market after adjusting for risk.

Hedge fund interest in Biglari Holdings Inc (NYSE:BH) shares was flat at the end of last quarter. This is usually a negative indicator. At the end of this article, we will also compare BH to other stocks including TETRA Technologies, Inc. (NYSE:TTI), Aurinia Pharmaceuticals Inc (NASDAQ:AUPH), and Domo Inc. (NASDAQ:DOMO) to get a better sense of its popularity.

According to most market participants, hedge funds are assumed to be underperforming, outdated investment tools of years past. While there are greater than 8000 funds trading today, We choose to focus on the moguls of this club, about 700 funds. These investment experts shepherd most of all hedge funds’ total asset base, and by keeping an eye on their first-class equity investments, Insider Monkey has formulated a number of investment strategies that have historically outperformed Mr. Market. Insider Monkey’s flagship hedge fund strategy outpaced the S&P 500 index by 6 percentage points per year since its inception in May 2014 through early November 2018. We were able to generate large returns even by identifying short candidates. Our portfolio of short stocks lost 26.1% since February 2017 even though the market was up nearly 19% during the same period. We just shared a list of 11 short targets in our latest quarterly update.

While collecting more data about Biglari Holdings Inc (NYSE:BH) we came across Dan Roller’s letter to shareholders of Maran Capital Management for the 2017 fourth quarter, in which this hedge fund shares its views on the company. We bring you one part of the report:

“BH fell from just under $400 in late July to a low of just under $300 in August/September. As I indicated in my 3Q letter, I thought the sell-off provided a compelling opportunity to add to the position, which I did (nearly doubling the position size between September 1 and November 30, to over 20% of the partnership’s capital). We were buying shares at less than the value of the company’s cash and securities, and getting all of the fully-owned business for free. The extreme mispricing of the security abated over the course of December, and I have since reduced the size of the position. BH remains a core holding.”

How have hedgies been trading Biglari Holdings Inc (NYSE:BH)?

Heading into the fourth quarter of 2018, a total of 7 of the hedge funds tracked by Insider Monkey were bullish on this stock, a change of 0% from the previous quarter, certainly not enough to warrant a place on the 30 most popular stocks among hedge funds in Q3 of 2018.. On the other hand, there were a total of 8 hedge funds with a bullish position in BH at the beginning of this year. With hedge funds’ sentiment swirling, there exists a select group of noteworthy hedge fund managers who were adding to their stakes significantly (or already accumulated large positions). 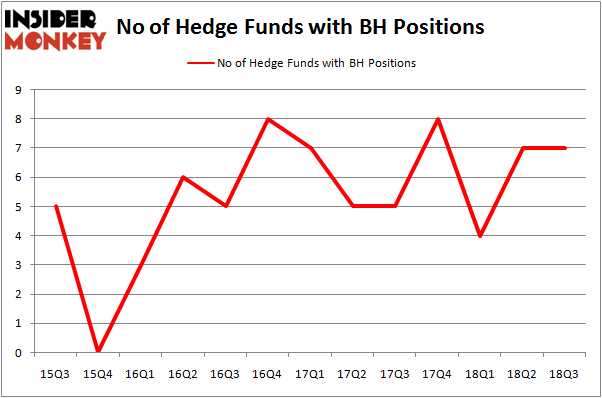 Since Biglari Holdings Inc (NYSE:BH) has witnessed falling interest from hedge fund managers, it’s safe to say that there was a specific group of funds that slashed their entire stakes heading into Q3. At the top of the heap, Roger Ibbotson’s Zebra Capital Management said goodbye to the largest stake of all the hedgies followed by Insider Monkey, worth close to $0.3 million in stock. Gavin Saitowitz and Cisco J. del Valle’s fund, Springbok Capital, also dumped its stock, about $0 million worth. These transactions are intriguing to say the least, as aggregate hedge fund interest stayed the same (this is a bearish signal in our experience).

As you can see these stocks had an average of 10.25 hedge funds with bullish positions and the average amount invested in these stocks was $36 million. That figure was $44 million in BH’s case. TETRA Technologies, Inc. (NYSE:TTI) is the most popular stock in this table. On the other hand Franklin Financial Network Inc (NYSE:FSB) is the least popular one with only 2 bullish hedge fund positions. Biglari Holdings Inc (NYSE:BH) is not the least popular stock in this group but hedge fund interest is still below average. This is a slightly negative signal and we’d rather spend our time researching stocks that hedge funds are piling on. In this regard TTI might be a better candidate to consider a long position.