We at Insider Monkey have gone over 700 13F filings that hedge funds and prominent investors are required to file by the SEC. The 13F filings show the funds’ and investors’ portfolio positions as of September 30th. In this article we look at what those investors think of Bank of Hawaii Corporation (NYSE:BOH).

Bank of Hawaii Corporation (NYSE:BOH) was in 12 hedge funds’ portfolios at the end of September. BOH shareholders have witnessed an increase in support from the world’s most elite money managers of late. There were 11 hedge funds in our database with BOH holdings at the end of the previous quarter. Our calculations also showed that boh isn’t among the 30 most popular stocks among hedge funds.

At the moment there are dozens of signals stock market investors have at their disposal to appraise publicly traded companies. A duo of the most under-the-radar signals are hedge fund and insider trading sentiment. Our researchers have shown that, historically, those who follow the best picks of the best investment managers can outperform the S&P 500 by a significant amount (see the details here). 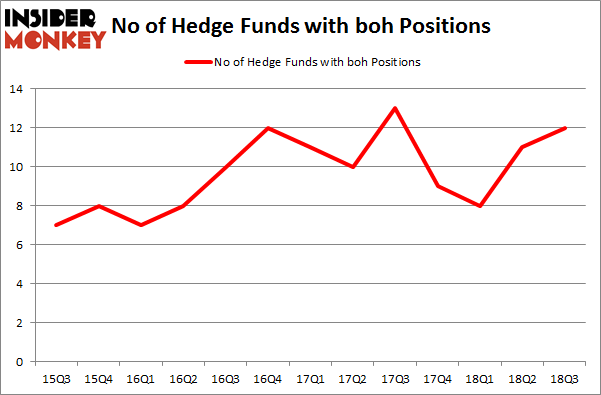 Of the funds tracked by Insider Monkey, Jim Simons’s Renaissance Technologies has the most valuable position in Bank of Hawaii Corporation (NYSE:BOH), worth close to $23.5 million, comprising less than 0.1%% of its total 13F portfolio. The second most bullish fund manager is Royce & Associates, led by Chuck Royce, holding a $21.5 million position; 0.1% of its 13F portfolio is allocated to the stock. Other members of the smart money with similar optimism consist of Dmitry Balyasny’s Balyasny Asset Management, Peter Rathjens, Bruce Clarke and John Campbell’s Arrowstreet Capital and John Overdeck and David Siegel’s Two Sigma Advisors.

As one would reasonably expect, key money managers have been driving this bullishness. Caxton Associates LP, managed by Bruce Kovner, initiated the largest position in Bank of Hawaii Corporation (NYSE:BOH). Caxton Associates LP had $0.3 million invested in the company at the end of the quarter.

As you can see these stocks had an average of 17.25 hedge funds with bullish positions and the average amount invested in these stocks was $254 million. That figure was $85 million in BOH’s case. FireEye Inc (NASDAQ:FEYE) is the most popular stock in this table. On the other hand Holly Energy Partners, L.P. (NYSE:HEP) is the least popular one with only 3 bullish hedge fund positions. Bank of Hawaii Corporation (NYSE:BOH) is not the least popular stock in this group but hedge fund interest is still below average. This is a slightly negative signal and we’d rather spend our time researching stocks that hedge funds are piling on. In this regard FEYE might be a better candidate to consider a long position.