How do we determine whether Banco Bradesco SA (NYSE:BBD) makes for a good investment at the moment? We analyze the sentiment of a select group of the very best investors in the world, who spend immense amounts of time and resources studying companies. They may not always be right (no one is), but data shows that their consensus long positions have historically outperformed the market when we adjust for known risk factors.

Banco Bradesco SA (NYSE:BBD) has seen a decrease in enthusiasm from smart money of late. BBD was in 14 hedge funds’ portfolios at the end of September. There were 15 hedge funds in our database with BBD positions at the end of the previous quarter. Our calculations also showed that BBD isn’t among the 30 most popular stocks among hedge funds.

To the average investor there are dozens of metrics market participants have at their disposal to evaluate stocks. A couple of the less known metrics are hedge fund and insider trading interest. We have shown that, historically, those who follow the best picks of the best hedge fund managers can outperform their index-focused peers by a superb margin (see the details here).

What does the smart money think about Banco Bradesco SA (NYSE:BBD)?

At Q3’s end, a total of 14 of the hedge funds tracked by Insider Monkey held long positions in this stock, a change of -7% from the previous quarter. By comparison, 15 hedge funds held shares or bullish call options in BBD heading into this year. With hedgies’ sentiment swirling, there exists an “upper tier” of noteworthy hedge fund managers who were adding to their holdings meaningfully (or already accumulated large positions). 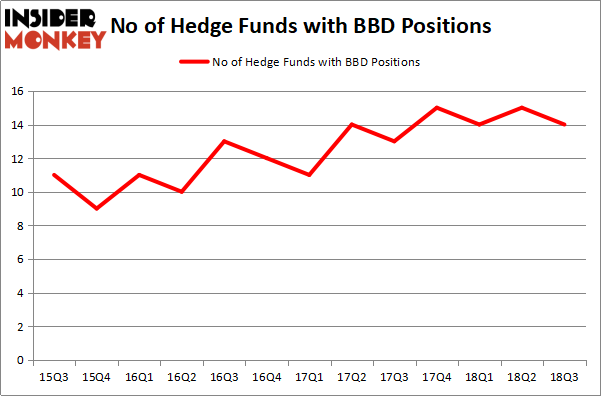 Seeing as Banco Bradesco SA (NYSE:BBD) has witnessed a decline in interest from the entirety of the hedge funds we track, it’s safe to say that there exists a select few hedgies who were dropping their positions entirely last quarter. Intriguingly, Peter Rathjens, Bruce Clarke and John Campbell’s Arrowstreet Capital said goodbye to the largest investment of the “upper crust” of funds monitored by Insider Monkey, totaling an estimated $92.1 million in call options, and David Halpert’s Prince Street Capital Management was right behind this move, as the fund said goodbye to about $28.8 million worth. These moves are intriguing to say the least, as aggregate hedge fund interest fell by 1 funds last quarter.

As you can see these stocks had an average of 35.25 hedge funds with bullish positions and the average amount invested in these stocks was $1.15 billion. That figure was $494 million in BBD’s case. American International Group Inc (NYSE:AIG) is the most popular stock in this table. On the other hand Illinois Tool Works Inc. (NYSE:ITW) is the least popular one with only 26 bullish hedge fund positions. Compared to these stocks Banco Bradesco SA (NYSE:BBD) is even less popular than ITW. Considering that hedge funds aren’t fond of this stock in relation to other companies analyzed in this article, it may be a good idea to analyze it in detail and understand why the smart money isn’t behind this stock. This isn’t necessarily bad news. Although it is possible that hedge funds may think the stock is overpriced and view the stock as a short candidate, they may not be very familiar with the bullish thesis. In either case more research is warranted.

Is II-VI, Inc. (IIVI) A Good Stock To Buy?
Monthly Newsletter Strategy
Download a free copy of our newsletter and see the details inside!
Hedge Fund Resource Center
Related News
More Hedge Funds Are Buying Into This Foreign Banking Stock 5 Stocks That “The World’s Most Bearish Hedge Fund” Actually Likes Why These 5 Stocks Are Posting Big Moves Today What Is Going On With These Falling Stocks? Brazilian Arrests Have Currency, Banco Bradesco SA (ADR) (BBD) Tumbling Why Are Stocks of Brazilian Companies Struggling Today? Top Investors are Wary of These Rising Brazilian Stocks 11 Best Inexpensive Bourbons Under $25 That Don’t Taste Cheap 10 Best Vacation Spots for Singles in Their 40’s 15 Highest Paid YouTubers of 2018
Billionaire Hedge Funds