“Market conditions are changing. The continued rise in interest rates suggests we are in the early stages of a bond bear market, which could intensify as central banks withdraw liquidity. The receding tide of liquidity will start to reveal more rocks beyond what has been exposed in emerging markets so far, and the value of a value discipline will be in avoiding the biggest capital-destroying rocks. If a rock emerges on the crowded shore of U.S. momentum, it could result in a major liquidity challenge, as momentum is often most intense on the downside as a crowded trade reverses. So investors are facing a large potential trade-off right now: continue to bet on the current dominance of momentum and the S&P 500, or bet on change and take an active value bet in names with attractive value and optionality, but with negative momentum,” said Clearbridge Investments in its market commentary.

We aren’t sure whether long-term interest rates will top 5% and value stocks outperform growth, but we follow hedge fund investor letters to understand where the markets and stocks might be going. This article will lay out and discuss the hedge fund and institutional investor sentiment towards Atlas Financial Holdings Inc (NASDAQ:AFH).

To most investors, hedge funds are perceived as underperforming, outdated financial vehicles of the past. While there are greater than 8,000 funds trading at present, We hone in on the moguls of this club, approximately 700 funds. These money managers command the bulk of the smart money’s total asset base, and by tailing their unrivaled picks, Insider Monkey has identified many investment strategies that have historically beaten the broader indices. Insider Monkey’s flagship hedge fund strategy outperformed the S&P 500 index by 6 percentage points a year since its inception in May 2014 through early November 2018. We were able to generate large returns even by identifying short candidates. Our portfolio of short stocks lost 24% since February 2017 (through December 3rd) even though the market was up nearly 23% during the same period. We just shared a list of 11 short targets in our latest quarterly update.

While collecting data for our article, we came across Incandescent Capital’s Quarterly Report, in which the hedge fund provided a detailed account regarding the smartphone company. Managing Member Eric Wu had this to say regarding the holding in his letter to the shareholders:

Our insurance holdings provided perhaps the most ―excitement I‘ve experienced this year. In my Q1 letter, I mentioned that a couple of them sold off, both to degrees that overshot any fundamental reasoning, and, both of which I subsequently invested more into.

The first was Atlas Financial (AFH), a top three position of ours which specializes in the niche corner of taxi, limo, and paratransit commercial auto insurance. Atlas reported a significant ―reserve strengthening in late February last year, which is insurance lingo for bigger-than-expected losses. Economic net impact amounted to $17 million, but its stock shed about $40 million in market cap in the aftermath.

At the end of the third quarter, a total of 9 of the hedge funds tracked by Insider Monkey held long positions in this stock, no change from one quarter earlier. The graph below displays the number of hedge funds with bullish position in AFH over the last 13 quarters. With hedgies’ sentiment swirling, there exists an “upper tier” of key hedge fund managers who were increasing their stakes significantly (or already accumulated large positions). 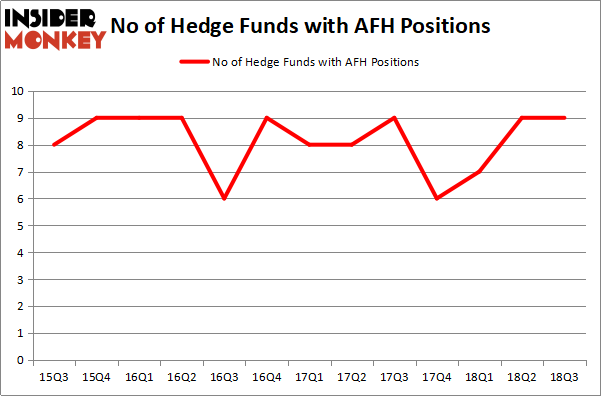 More specifically, Ariel Investments was the largest shareholder of Atlas Financial Holdings Inc (NASDAQ:AFH), with a stake worth $17.4 million reported as of the end of September. Trailing Ariel Investments was Capital Returns Management, which amassed a stake valued at $6.7 million. Renaissance Technologies, Millennium Management, and Prescott Group Capital Management were also very fond of the stock, giving the stock large weights in their portfolios.

Judging by the fact that Atlas Financial Holdings Inc (NASDAQ:AFH) has faced declining sentiment from the smart money, it’s safe to say that there were a few fund managers that elected to cut their positions entirely last quarter. At the top of the heap, Ric Dillon’s Diamond Hill Capital dropped the biggest investment of the “upper crust” of funds tracked by Insider Monkey, comprising close to $0.5 million in stock. Dmitry Balyasny’s fund, Balyasny Asset Management, also dropped its stock, about $0.1 million worth. These transactions are important to note, as total hedge fund interest stayed the same (this is a bearish signal in our experience).