How do you pick the next stock to invest in? One way would be to spend hours of research browsing through thousands of publicly traded companies. However, an easier way is to look at the stocks that smart money investors are collectively bullish on. Hedge funds and other institutional investors usually invest large amounts of capital and have to conduct due diligence while choosing their next pick. They don’t always get it right, but, on average, their stock picks historically generated strong returns after adjusting for known risk factors. With this in mind, let’s take a look at the recent hedge fund activity surrounding ASML Holding N.V. (NASDAQ:ASML).

ASML Holding N.V. (NASDAQ:ASML) was in 13 hedge funds’ portfolios at the end of September. ASML investors should be aware of an increase in support from the world’s most elite money managers in recent months. There were 12 hedge funds in our database with ASML positions at the end of the previous quarter. Our calculations also showed that ASML isn’t among the 30 most popular stocks among hedge funds.

Today there are numerous indicators market participants employ to evaluate stocks. Two of the most underrated indicators are hedge fund and insider trading signals. Our researchers have shown that, historically, those who follow the best picks of the top investment managers can trounce the S&P 500 by a very impressive amount (see the details here).

Heading into the fourth quarter of 2018, a total of 13 of the hedge funds tracked by Insider Monkey were long this stock, a change of 8% from one quarter earlier. On the other hand, there were a total of 18 hedge funds with a bullish position in ASML at the beginning of this year. With the smart money’s sentiment swirling, there exists a few notable hedge fund managers who were increasing their stakes substantially (or already accumulated large positions). 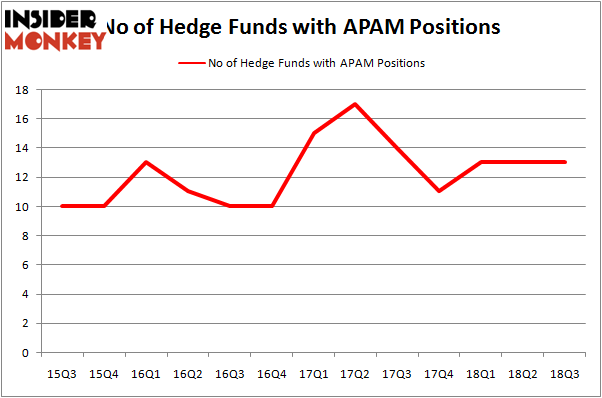 Now, key money managers have been driving this bullishness. HBK Investments, managed by David Costen Haley, initiated the most valuable position in ASML Holding N.V. (NASDAQ:ASML). HBK Investments had $2.1 million invested in the company at the end of the quarter. Michael Platt and William Reeves’s BlueCrest Capital Mgmt. also initiated a $1 million position during the quarter. The only other fund with a new position in the stock is Peter Rathjens, Bruce Clarke and John Campbell’s Arrowstreet Capital.

As you can see these stocks had an average of 40.5 hedge funds with bullish positions and the average amount invested in these stocks was $2.30 billion. That figure was $525 million in ASML’s case. Baidu.com, Inc. (NASDAQ:BIDU) is the most popular stock in this table. On the other hand Petroleo Brasileiro S.A. – Petrobras (NYSE:PBR) is the least popular one with only 28 bullish hedge fund positions. Compared to these stocks ASML Holding N.V. (NASDAQ:ASML) is even less popular than PBR. Considering that hedge funds aren’t fond of this stock in relation to other companies analyzed in this article, it may be a good idea to analyze it in detail and understand why the smart money isn’t behind this stock. This isn’t necessarily bad news. Although it is possible that hedge funds may think the stock is overpriced and view the stock as a short candidate, they may not be very familiar with the bullish thesis. In either case more research is warranted.