“Market conditions are changing. The continued rise in interest rates suggests we are in the early stages of a bond bear market, which could intensify as central banks withdraw liquidity. The receding tide of liquidity will start to reveal more rocks beyond what has been exposed in emerging markets so far, and the value of a value discipline will be in avoiding the biggest capital-destroying rocks. If a rock emerges on the crowded shore of U.S. momentum, it could result in a major liquidity challenge, as momentum is often most intense on the downside as a crowded trade reverses. So investors are facing a large potential trade-off right now: continue to bet on the current dominance of momentum and the S&P 500, or bet on change and take an active value bet in names with attractive value and optionality, but with negative momentum,” said Clearbridge Investments in its market commentary. We aren’t sure whether long-term interest rates will top 5% and value stocks outperform growth, but we follow hedge fund investor letters to understand where the markets and stocks might be going. This article will lay out and discuss the hedge fund and institutional investor sentiment towards argenx SE (NASDAQ:ARGX).

argenx SE (NASDAQ:ARGX) was in 34 hedge funds’ portfolios at the end of September. ARGX investors should be aware of an increase in hedge fund interest of late. There were 23 hedge funds in our database with ARGX holdings at the end of the previous quarter. Our calculations also showed that argx isn’t among the 30 most popular stocks among hedge funds.

What does the smart money think about argenx SE (NASDAQ:ARGX)?

Heading into the fourth quarter of 2018, a total of 34 of the hedge funds tracked by Insider Monkey were long this stock, a change of 48% from the previous quarter. By comparison, 21 hedge funds held shares or bullish call options in ARGX heading into this year. With the smart money’s sentiment swirling, there exists an “upper tier” of noteworthy hedge fund managers who were adding to their stakes considerably (or already accumulated large positions). 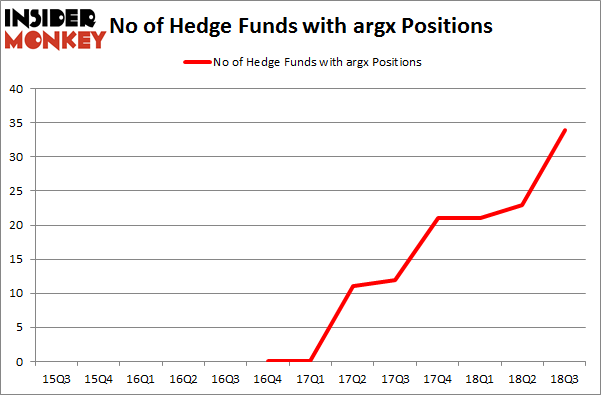 Now, key money managers have jumped into argenx SE (NASDAQ:ARGX) headfirst. Laurion Capital Management, managed by Benjamin A. Smith, assembled the most valuable position in argenx SE (NASDAQ:ARGX). Laurion Capital Management had $10.7 million invested in the company at the end of the quarter. Jeffrey Jay and David Kroin’s Great Point Partners also made a $9.8 million investment in the stock during the quarter. The other funds with new positions in the stock are Alec Litowitz and Ross Laser’s Magnetar Capital, Mark Lampert’s Biotechnology Value Fund / BVF Inc, and Brian Ashford-Russell and Tim Woolley’s Polar Capital.

As you can see these stocks had an average of 15 hedge funds with bullish positions and the average amount invested in these stocks was $144 million. That figure was $612 million in ARGX’s case. DSW Inc. (NYSE:DSW) is the most popular stock in this table. On the other hand Simmons First National Corporation (NASDAQ:SFNC) is the least popular one with only 9 bullish hedge fund positions. Compared to these stocks argenx SE (NASDAQ:ARGX) is more popular among hedge funds. Considering that hedge funds are fond of this stock in relation to its market cap peers, it may be a good idea to analyze it in detail and potentially include it in your portfolio.

Hedge Funds Are Crazy About Nutrien Ltd. (NTR)
Monthly Newsletter Strategy
Download a free copy of our newsletter and see the details inside!
Hedge Fund Resource Center
Related News
Five Stocks To Buy According To Top Biotech-Focused Funds The 10 Best Islands to Visit in 2019 5 Most Socially Responsible Companies in America 5 Ways You Can Eliminate Credit Card Debt
Billionaire Hedge Funds