Is ArcelorMittal (NYSE:MT) a good equity to bet on right now? We like to check what the smart money thinks first before doing extensive research. Although there have been several high profile failed hedge fund picks, the consensus picks among hedge fund investors have historically outperformed the market after adjusting for known risk attributes. It’s not surprising given that hedge funds have access to better information and more resources to find the latest market-moving information.

Is ArcelorMittal (NYSE:MT) a buy here? Hedge funds are getting less bullish. The number of bullish hedge fund positions went down by 2 lately. Our calculations also showed that MT isn’t among the 30 most popular stocks among hedge funds. MT was in 14 hedge funds’ portfolios at the end of September. There were 16 hedge funds in our database with MT holdings at the end of the previous quarter.

How have hedgies been trading ArcelorMittal (NYSE:MT)?

At Q3’s end, a total of 14 of the hedge funds tracked by Insider Monkey were long this stock, a change of -13% from the second quarter of 2018. On the other hand, there were a total of 20 hedge funds with a bullish position in MT at the beginning of this year. With hedgies’ capital changing hands, there exists a few notable hedge fund managers who were upping their stakes substantially (or already accumulated large positions). 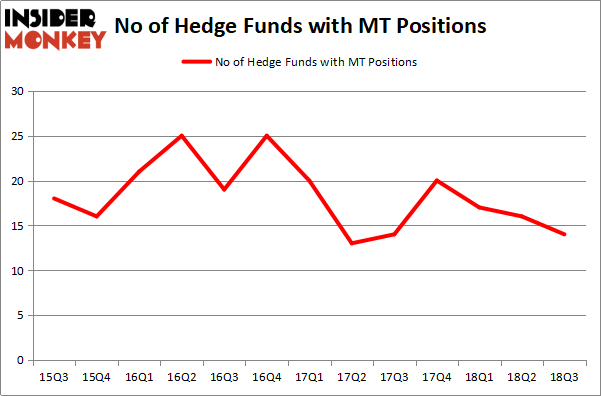 Due to the fact that ArcelorMittal (NYSE:MT) has experienced declining sentiment from the aggregate hedge fund industry, it’s easy to see that there was a specific group of money managers who sold off their positions entirely by the end of the third quarter. Interestingly, Robert Polak’s Anchor Bolt Capital cut the biggest position of all the hedgies tracked by Insider Monkey, comprising close to $16.8 million in stock. Christopher A. Winham’s fund, Tide Point Capital, also dumped its stock, about $10.6 million worth. These transactions are important to note, as aggregate hedge fund interest fell by 2 funds by the end of the third quarter.

As you can see these stocks had an average of 27.75 hedge funds with bullish positions and the average amount invested in these stocks was $1.64 billion. That figure was $180 million in MT’s case. Alexion Pharmaceuticals, Inc. (NASDAQ:ALXN) is the most popular stock in this table. On the other hand Nokia Corporation (NYSE:NOK) is the least popular one with only 19 bullish hedge fund positions. Compared to these stocks ArcelorMittal (NYSE:MT) is even less popular than NOK. Considering that hedge funds aren’t fond of this stock in relation to other companies analyzed in this article, it may be a good idea to analyze it in detail and understand why the smart money isn’t behind this stock. This isn’t necessarily bad news. Although it is possible that hedge funds may think the stock is overpriced and view the stock as a short candidate, they may not be very familiar with the bullish thesis. In either case more research is warranted.

TechTarget Inc (TTGT): Are Hedge Funds Right About This Stock?
Monthly Newsletter Strategy
Download a free copy of our newsletter and see the details inside!
Hedge Fund Resource Center
Related News
This Is What You Should Know About The Financial Markets Today 23 Key Stories That Are Shaking Up The Finance World Today Should You Follow Hedge Funds Out Of ArcelorMittal SA (ADR) (MT)? Here’s Why These Five Stocks Are in Spotlight Today Friday’s Headline-Making Stocks: Sony, Lions Gate, UBS, and 2 Others 5 Stocks That Have Kicked Off the Week on a Sour Note Hedge Funds Are Buying These Steel Stocks 10 Best Vacation Spots for Singles in Their 40’s 15 Highest Paid YouTubers of 2018 16 Good Excuses to Miss Work for a Few Days
Billionaire Hedge Funds