“Value has performed relatively poorly since the 2017 shift, but we believe challenges to the S&P 500’s dominance are mounting and resulting active opportunities away from the index are growing. At some point, this fault line will break, likely on the back of rising rates, and all investors will be reminded that the best time to diversify away from the winners is when it is most painful. The bargain of capturing long-term value may be short-term pain, but enough is eventually enough and it comes time to harvest the benefits.,” said Clearbridge Investments in its market commentary. We aren’t sure whether long-term interest rates will top 5% and value stocks outperform growth, but we follow hedge fund investor letters to understand where the markets and stocks might be going. That’s why we believe it would be worthwhile to take a look at the hedge fund sentiment on Arbutus Biopharma Corp (NASDAQ:ABUS) in order to identify whether reputable and successful top money managers continue to believe in its potential.

Is Arbutus Biopharma Corp (NASDAQ:ABUS) the right investment to pursue these days? The best stock pickers are becoming more confident. The number of bullish hedge fund bets moved up by 2 lately. Our calculations also showed that abus isn’t among the 30 most popular stocks among hedge funds. ABUS was in 11 hedge funds’ portfolios at the end of the third quarter of 2018. There were 9 hedge funds in our database with ABUS positions at the end of the previous quarter.

How have hedgies been trading Arbutus Biopharma Corp (NASDAQ:ABUS)?

Heading into the fourth quarter of 2018, a total of 11 of the hedge funds tracked by Insider Monkey were long this stock, a change of 22% from one quarter earlier. By comparison, 8 hedge funds held shares or bullish call options in ABUS heading into this year. With hedgies’ capital changing hands, there exists an “upper tier” of noteworthy hedge fund managers who were upping their stakes considerably (or already accumulated large positions). 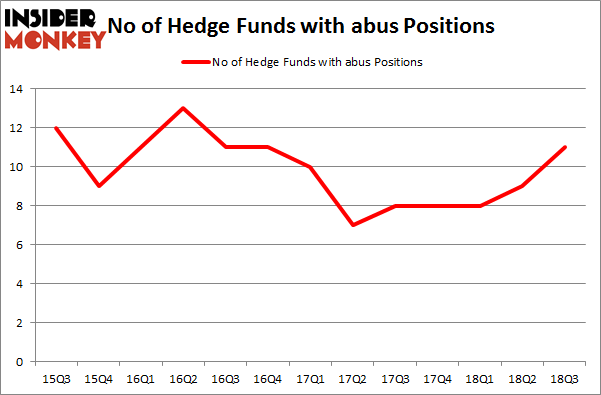 When looking at the institutional investors followed by Insider Monkey, EcoR1 Capital, managed by Oleg Nodelman, holds the largest position in Arbutus Biopharma Corp (NASDAQ:ABUS). EcoR1 Capital has a $11.6 million position in the stock, comprising 1% of its 13F portfolio. Coming in second is Sio Capital, led by Michael Castor, holding a $1.6 million position; 0.5% of its 13F portfolio is allocated to the stock. Other peers that hold long positions include Sander Gerber’s Hudson Bay Capital Management, Thomas Bailard’s Bailard Inc and D. E. Shaw’s D E Shaw.

As industrywide interest jumped, key hedge funds have been driving this bullishness. EcoR1 Capital, managed by Oleg Nodelman, created the most valuable position in Arbutus Biopharma Corp (NASDAQ:ABUS). EcoR1 Capital had $11.6 million invested in the company at the end of the quarter. Michael Castor’s Sio Capital also initiated a $1.6 million position during the quarter. The other funds with brand new ABUS positions are Thomas Bailard’s Bailard Inc and John Overdeck and David Siegel’s Two Sigma Advisors.

Let’s go over hedge fund activity in other stocks – not necessarily in the same industry as Arbutus Biopharma Corp (NASDAQ:ABUS) but similarly valued. We will take a look at Nicolet Bankshares Inc. (NASDAQ:NCBS), J.C. Penney Company, Inc. (NYSE:JCP), Kimball Electronics Inc (NASDAQ:KE), and MediciNova, Inc. (NASDAQ:MNOV). All of these stocks’ market caps are similar to ABUS’s market cap.

As you can see these stocks had an average of 8.75 hedge funds with bullish positions and the average amount invested in these stocks was $22 million. That figure was $17 million in ABUS’s case. J.C. Penney Company, Inc. (NYSE:JCP) is the most popular stock in this table. On the other hand MediciNova, Inc. (NASDAQ:MNOV) is the least popular one with only 2 bullish hedge fund positions. Arbutus Biopharma Corp (NASDAQ:ABUS) is not the most popular stock in this group but hedge fund interest is still above average. This is a slightly positive signal but we’d rather spend our time researching stocks that hedge funds are piling on. In this regard JCP might be a better candidate to consider a long position.