Ambarella Inc (NASDAQ:AMBA) investors should pay attention to an increase in hedge fund interest in recent months. Our calculations also showed that amba isn’t among the 30 most popular stocks among hedge funds.

How have hedgies been trading Ambarella Inc (NASDAQ:AMBA)? 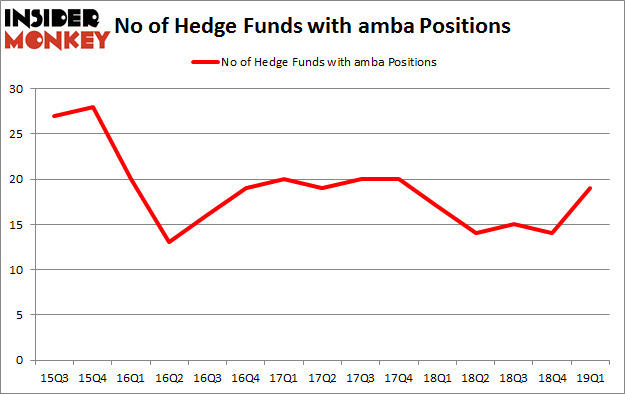 More specifically, Citadel Investment Group was the largest shareholder of Ambarella Inc (NASDAQ:AMBA), with a stake worth $40.6 million reported as of the end of March. Trailing Citadel Investment Group was Renaissance Technologies, which amassed a stake valued at $11.4 million. Columbus Circle Investors, Potrero Capital Research, and First Pacific Advisors LLC were also very fond of the stock, giving the stock large weights in their portfolios.

As one would reasonably expect, specific money managers have been driving this bullishness. Renaissance Technologies, managed by Jim Simons, initiated the most valuable position in Ambarella Inc (NASDAQ:AMBA). Renaissance Technologies had $11.4 million invested in the company at the end of the quarter. Principal Global Investors’s Columbus Circle Investors also initiated a $9.8 million position during the quarter. The following funds were also among the new AMBA investors: Frank Slattery’s Symmetry Peak Management, Peter Rathjens, Bruce Clarke and John Campbell’s Arrowstreet Capital, and Brandon Haley’s Holocene Advisors.

As you can see these stocks had an average of 17.25 hedge funds with bullish positions and the average amount invested in these stocks was $253 million. That figure was $100 million in AMBA’s case. Shutterfly, Inc. (NASDAQ:SFLY) is the most popular stock in this table. On the other hand Suburban Propane Partners LP (NYSE:SPH) is the least popular one with only 5 bullish hedge fund positions. Ambarella Inc (NASDAQ:AMBA) is not the most popular stock in this group but hedge fund interest is still above average. This is a slightly positive signal but we’d rather spend our time researching stocks that hedge funds are piling on. Our calculations showed that top 20 most popular stocks among hedge funds returned 1.9% in Q2 through May 30th and outperformed the S&P 500 ETF (SPY) by more than 3 percentage points. Unfortunately AMBA wasn’t nearly as popular as these 20 stocks and hedge funds that were betting on AMBA were disappointed as the stock returned -11% during the same period and underperformed the market. If you are interested in investing in large cap stocks with huge upside potential, you should check out the top 20 most popular stocks among hedge funds as 13 of these stocks already outperformed the market so far in Q2.