Concerns over rising interest rates and expected further rate increases have hit several stocks hard since the end of the third quarter. NASDAQ and Russell 2000 indices are already in correction territory. More importantly, Russell 2000 ETF (IWM) underperformed the larger S&P 500 ETF (SPY) by about 4 percentage points in the first half of the fourth quarter. Hedge funds and institutional investors tracked by Insider Monkey usually invest a disproportionate amount of their portfolios in smaller cap stocks. We have been receiving indications that hedge funds were paring back their overall exposure and this is one of the factors behind the recent movements in major indices. In this article, we will take a closer look at hedge fund sentiment towards Alkermes Plc (NASDAQ:ALKS).

Is Alkermes Plc (NASDAQ:ALKS) an exceptional investment today? Money managers are in a pessimistic mood. The number of long hedge fund positions dropped by 1 in recent months. Our calculations also showed that ALKS isn’t among the 30 most popular stocks among hedge funds. ALKS was in 16 hedge funds’ portfolios at the end of the third quarter of 2018. There were 17 hedge funds in our database with ALKS positions at the end of the previous quarter.

Heading into the fourth quarter of 2018, a total of 16 of the hedge funds tracked by Insider Monkey were long this stock, a change of -6% from the previous quarter. Below, you can check out the change in hedge fund sentiment towards ALKS over the last 13 quarters. With the smart money’s capital changing hands, there exists a few notable hedge fund managers who were upping their stakes meaningfully (or already accumulated large positions). 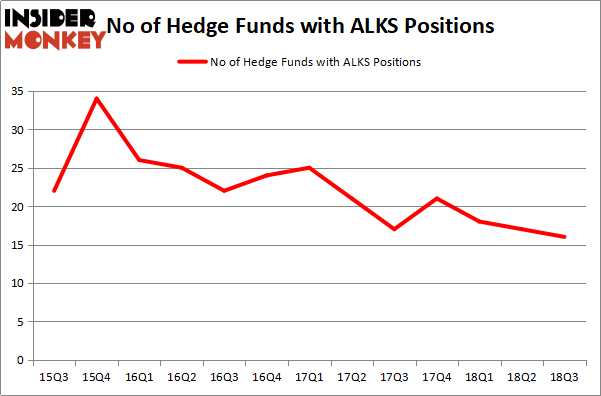 When looking at the institutional investors followed by Insider Monkey, Woodford Investment Management, managed by Neil Woodford, holds the biggest position in Alkermes Plc (NASDAQ:ALKS). Woodford Investment Management has a $112.9 million position in the stock, comprising 9% of its 13F portfolio. The second most bullish fund manager is Millennium Management, led by Israel Englander, holding a $12.4 million position; the fund has less than 0.1%% of its 13F portfolio invested in the stock. Remaining peers that are bullish contain Israel Englander’s Millennium Management, Samuel Isaly’s OrbiMed Advisors and D. E. Shaw’s D E Shaw.

Due to the fact that Alkermes Plc (NASDAQ:ALKS) has experienced a decline in interest from hedge fund managers, we can see that there is a sect of hedgies that elected to cut their positions entirely heading into Q3. Interestingly, Phill Gross and Robert Atchinson’s Adage Capital Management said goodbye to the biggest position of all the hedgies followed by Insider Monkey, totaling close to $7.2 million in call options. Gavin Saitowitz and Cisco J. del Valle’s fund, Springbok Capital, also dropped its call options, about $1.5 million worth. These bearish behaviors are important to note, as aggregate hedge fund interest dropped by 1 funds heading into Q3.

As you can see these stocks had an average of 12.75 hedge funds with bullish positions and the average amount invested in these stocks was $273 million. That figure was $160 million in ALKS’s case. Jones Lang LaSalle Inc (NYSE:JLL) is the most popular stock in this table. On the other hand Western Gas Equity Partners LP (NYSE:WGP) is the least popular one with only 5 bullish hedge fund positions. Alkermes Plc (NASDAQ:ALKS) is not the most popular stock in this group but hedge fund interest is still above average. This is a slightly positive signal but we’d rather spend our time researching stocks that hedge funds are piling on. In this regard JLL might be a better candidate to consider a long position.