Hedge Funds and other institutional investors have just completed filing their 13Fs with the Securities and Exchange Commission, revealing their equity portfolios as of the end of September. At Insider Monkey, we follow over 700 of the best-performing investors and by analyzing their 13F filings, we can determine the stocks that they are collectively bullish on. One of their picks is Akamai Technologies, Inc. (NASDAQ:AKAM), so let’s take a closer look at the sentiment that surrounds it in the current quarter.

Is Akamai Technologies, Inc. (NASDAQ:AKAM) ready to rally soon? Investors who are in the know are taking an optimistic view. The number of long hedge fund bets improved by 1 in recent months. Our calculations also showed that AKAM isn’t among the 30 most popular stocks among hedge funds.

What have hedge funds been doing with Akamai Technologies, Inc. (NASDAQ:AKAM)?

Heading into the fourth quarter of 2018, a total of 29 of the hedge funds tracked by Insider Monkey were bullish on this stock, a change of 4% from the second quarter of 2018. By comparison, 24 hedge funds held shares or bullish call options in AKAM heading into this year. With hedge funds’ sentiment swirling, there exists a select group of noteworthy hedge fund managers who were upping their stakes considerably (or already accumulated large positions). 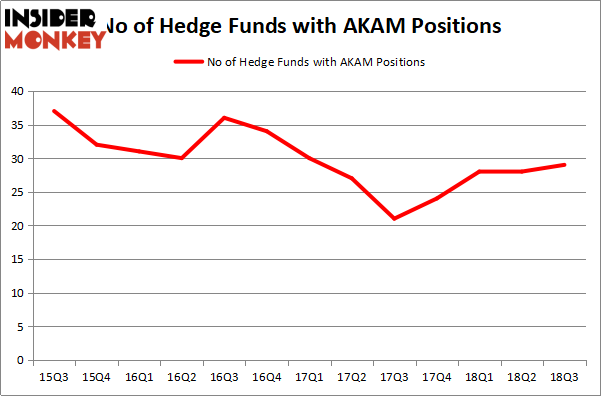 The largest stake in Akamai Technologies, Inc. (NASDAQ:AKAM) was held by AQR Capital Management, which reported holding $311.2 million worth of stock at the end of September. It was followed by Elliott Management with a $146.3 million position. Other investors bullish on the company included Kensico Capital, Freshford Capital Management, and Millennium Management.

With a general bullishness amongst the heavyweights, key hedge funds have jumped into Akamai Technologies, Inc. (NASDAQ:AKAM) headfirst. Balyasny Asset Management, managed by Dmitry Balyasny, established the most outsized call position in Akamai Technologies, Inc. (NASDAQ:AKAM). Balyasny Asset Management had $13.8 million invested in the company at the end of the quarter. Nick Niell’s Arrowgrass Capital Partners also made a $9.1 million investment in the stock during the quarter. The other funds with new positions in the stock are Benjamin A. Smith’s Laurion Capital Management, Paul Tudor Jones’s Tudor Investment Corp, and Andrew Feldstein and Stephen Siderow’s Blue Mountain Capital.

View table here if you experience formatting issues.
As you can see these stocks had an average of 20.5 hedge funds with bullish positions and the average amount invested in these stocks was $755.64 billion. That figure was $785 million in AKAM’s case. Domino’s Pizza, Inc. (NYSE:DPZ) is the most popular stock in this table. On the other hand Jack Henry & Associates, Inc. (NASDAQ:JKHY) is the least popular one with only 14 bullish hedge fund positions. Compared to these stocks Akamai Technologies, Inc. (NASDAQ:AKAM) is more popular among hedge funds. Considering that hedge funds are fond of this stock in relation to its market cap peers, it may be a good idea to analyze it in detail and potentially include it in your portfolio.