Aaron’s, Inc. (NYSE:AAN) has seen a decrease in enthusiasm from smart money lately. Our calculations also showed that aan isn’t among the 30 most popular stocks among hedge funds.

How have hedgies been trading Aaron’s, Inc. (NYSE:AAN)?

At the end of the third quarter, a total of 18 of the hedge funds tracked by Insider Monkey were long this stock, a change of -14% from the previous quarter. The graph below displays the number of hedge funds with bullish position in AAN over the last 13 quarters. With the smart money’s capital changing hands, there exists an “upper tier” of notable hedge fund managers who were adding to their holdings substantially (or already accumulated large positions). 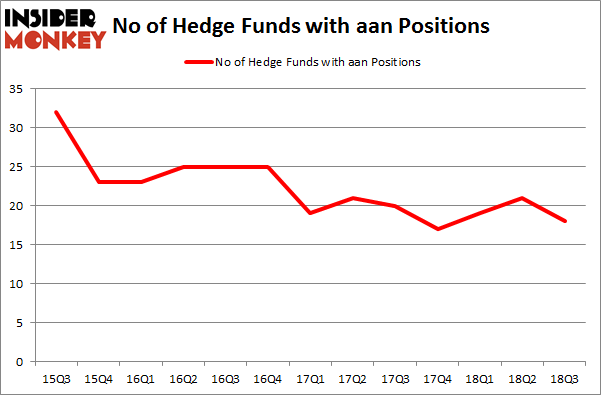 The largest stake in Aaron’s, Inc. (NYSE:AAN) was held by Diamond Hill Capital, which reported holding $59.4 million worth of stock at the end of September. It was followed by Portolan Capital Management with a $34.2 million position. Other investors bullish on the company included GLG Partners, GAMCO Investors, and AQR Capital Management.

Since Aaron’s, Inc. (NYSE:AAN) has witnessed declining sentiment from the aggregate hedge fund industry, it’s easy to see that there were a few funds who were dropping their full holdings by the end of the third quarter. Intriguingly, David Costen Haley’s HBK Investments cut the biggest position of the 700 funds watched by Insider Monkey, comprising close to $1.4 million in stock. Roger Ibbotson’s fund, Zebra Capital Management, also dumped its stock, about $0.5 million worth. These bearish behaviors are important to note, as aggregate hedge fund interest fell by 3 funds by the end of the third quarter.

As you can see these stocks had an average of 17 hedge funds with bullish positions and the average amount invested in these stocks was $175 million. That figure was $242 million in AAN’s case. Macquarie Infrastructure Corporation (NYSE:MIC) is the most popular stock in this table. On the other hand Ardagh Group S.A. (NYSE:ARD) is the least popular one with only 8 bullish hedge fund positions. Aaron’s, Inc. (NYSE:AAN) is not the most popular stock in this group but hedge fund interest is still above average. This is a slightly positive signal but we’d rather spend our time researching stocks that hedge funds are piling on. In this regard MIC might be a better candidate to consider a long position.