Hormel Foods Corp (NYSE:HRL) was founded in 1891 by George Hormel in the small town of Austin Minnesota.

Today, Hormel has a market cap of $17.4 billion.  The company has assembled a portfolio of well-known food brands.  The image below shows many of the company’s most popular brands. 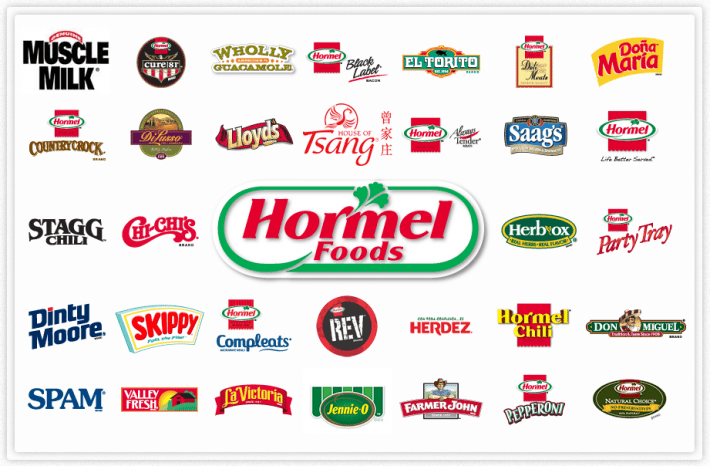 Hormel operates in the slowly changing packaged meat and packaged food industry.  The stability of the industry in general, and Hormel in particular, has resulted in a tremendous streak of dividend growth.

However, smart money are not that impressed about the company. According to our database of around 730 hedge funds, only 21 held long positions in the company at the end of June and while this number went up by six during the second quarter, the aggregate value of their stakes increased slightly to $258.41 million and represented only 1.70% of the outstanding stock. Among them, the two largest shareholders were Cliff Asness‘ AQR Capital Management and Joel Greenblatt’s Gotham Asset Management. AQR inched up its position to 1.28 million shares, while Gotham reported a new stake of 1.16 million shares in its last 13F filing.

More than 30 of Hormel’s brands hold the #1 or #2 position in their respective market category.  The company’s competitive advantage comes from built up brand equity.

Over the last 3 years, Hormel has averaged advertising expenditures of about $100 million a year.  The company only spends around 1% of sales revenue a year on advertising.  This is far below what many other packaged foods companies spend.

Hormel Foods Corp (NYSE:HRL) does not need to advertise as much as its peers because many of its brands are already very well known.  Skippy, Spam, and Hormel are all well-known brands.  For younger consumers, Applegate Organics, Muscle Milk, and Jennie-O are likely very well known.

Where Hormel differentiates itself from its competitors is its growth through acquisitions.  The company has realized excellent growth by acquiring up-and-coming brands and then growing them.

Recent examples of large acquisitions for Hormel are CytoSport (makers of Muscle Milk) and Applegate Organics.

Hormel has used the cash flows from its slower growing but established meat brands like Dinty Moore and Spam and used them to acquire brands with great potential like Jennie-O, Applegate, and Muscle Milk.

Hormel’s growth story is far from over.  The company’s management says it has another $3 billion in debt capacity.  This will likely be used for additional acquisitions that match the company’s criteria.

Recent history shows that Hormel is looking for brands that appeal to millennials and focus on health benefits and/or high protein.

Related Insider Monkey Articles
This Activist Investor’s Picks May Be Lagging But They Are Poised For...Despite Weak Q3 Performance, You Should Follow Ken Fisher’s Favorite...11 Most Profitable Airlines In The World: Will It Last?
How Did Stephen Mandel’s Portfolio Come Through the Third Quarter?IBM, Citigroup, P&G: Diamond Hill Capital Was Another Market Victim In...Third Point’s Portfolio Struggled in the Turbulent Third Quarter
Monthly Newsletter Strategy
Download a free copy of our newsletter and see the details inside!
Hedge Fund Resource Center
Billionaire Hedge Funds