Reading headlines about The Coca-Cola Co (NYSE:KO), you would think the company will be shutting its doors soon.

– The End of the Coke Era on Business Insider

– Coca-Cola: End of an Era? on Seeking Alpha

– Is This The End of Coca-Cola As We Know It? on NASDAQ

Make it sound like Coca-Cola is on its last legs.

People here Coca-Cola, and they think of the iconic soda; and they are right to – Coca-Cola is the global leader in soda.

But there’s more to Coca-Cola than soda…

Coca-Cola is the global leader in:

The company has 20 brands that generate more than $1 billion a year in sales. And no, they aren’t all soda brands.

During the third quarter of the last year, Coca-Cola’s popularity among the investors tracked by Insider Monkey registered a decline, as the number of funds with long positions slid to 54 from 62. However, the aggregate value of their holdings fell just slightly to $1.93 billion from $1.95 billion and was equal to 11.10% of the company’s outstanding stock at the end of September. Warren Buffett’s Berkshire Hathaway is betting big on Coca-Cola, owning 400 million shares, followed by Donald Yacktman’s Yacktman Asset Management and Ken Fisher’s Fisher Asset Management with 24.89 million shares and 10.29 million shares, respectively.

As long as more people prefer any type of beverage to tap water, Coca-Cola will very likely grow.

That’s about as safe an investment as can be made.

Fortunately for Coca-Cola, greater numbers of people in the world are able to afford buying the company’s expensive (relative to tap water) beverages. 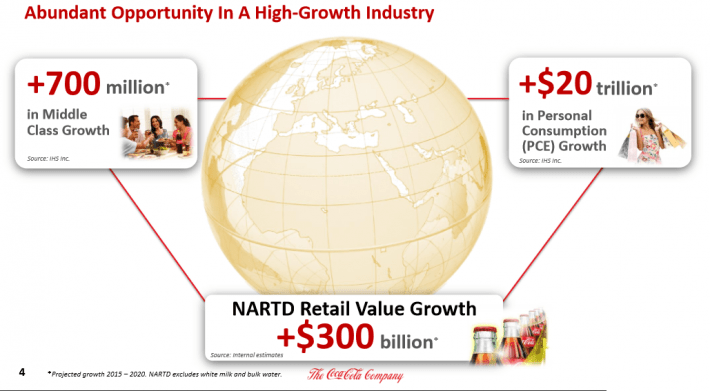 The company is also refranchising many North American bottlers and consolidating bottling agreements in other parts of the world.

Coca-Cola has also initiated zero-based budgeting. This process requires all expenditures to be approved, forcing management to regularly justify expenditures to create a more efficient organization.

Coca-Cola’s margin improvement program is expected to generate $3 billion in savings per year by 2019.