Published on December 3, 2015 at 4:24 pm by Sure Dividend in Dividend Stocks, News, Stock Analysis

Abbott Laboratories (NYSE:ABT) was founded in 1888 and has grown to reach a market cap of more than $67 billion.

Abbott Laboratories has been wildly successful in its long history.  The company’s success is not a historical relic; Abbott has positioned itself well to take advantage of growth in the emerging market health care sector.

Many corporations talk about being global. Abbott Laboratories really is global.  The company generates 69% of its sales internationally – and around 50% of sales come from emerging markets.

Abbott Laboratories became a lot more palatable to the investors tracked by Insider Monkey after its shares fell by about 18% in the third quarter. 55 of those investors were long Abbott by the end of the quarter, up from 49 at the start of it. And despite the aforementioned decline in shares, the value of those investors’ collective positions actually rose by 11% during that time, to $2.08 billion. Ric Dillon’s Diamond Hill Capital held an 8.39 million-share position in Abbott Laboratories on September 30, while Dmitry Balyasny’s Balyasny Asset Management added a 2.35 million-share position in Abbott to its portfolio during the third quarter. 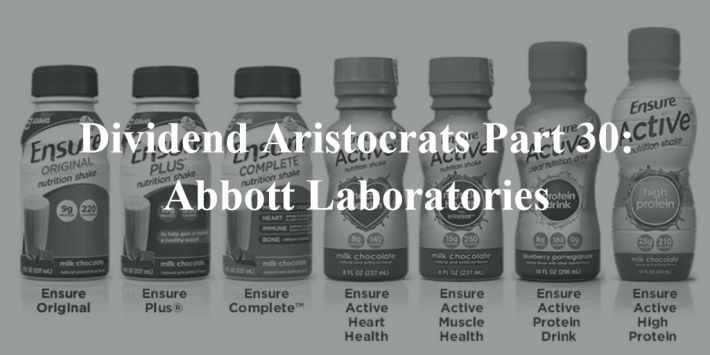 Over the long run, this will serve the company well – especially its large exposure to emerging markets.  The company takes a unique country-centered approach to growth:

“By designing and manufacturing our products in the markets we serve, we can better match them to local preferences, and produce them more efficiently. And by keeping our costs local, we reduce our exposure to foreign currency fluctuation.

This approach also lets us build our presence and strengthen our relationships with key stakeholders in every country in which we do business.”

In part 30 of Sure Dividend’s 52 part Dividend Aristocrats series, we will take a closer look at the growth prospects, valuation, and total return potential of Abbott Laboratories.

The company operates in 4 segments. Each segment is shown below along with the percentage of total revenue generated for Abbott Laboratories during the first 9 months of fiscal 2015:

The Nutrition segment manufactures and markets Ensure, Pedialyte, Similac,Zone Perfect, Elecare, and other health oriented nutrition products for every stage of human life from being an infant to old age.

The Diagnostics segment manufactures and sells various instruments, tests, and diagnostic equipment to blood banks, laboratories, and other health care facilities throughout the world.

Abbott Laboratories (NYSE:ABT) has paid a dividend every year since 1924.  The company has increased its dividend payments for 43 consecutive years (excluding the effects of spin-offs).  The company’s stock currently has a dividend yield of 2.1%.

Abbott Laboratories has a payout ratio of 43% (using adjusted earnings).  The company’s reasonable payout ratio gives management plenty of room to increase dividend payments, even if earnings were to be flat for a year.

Going forward, I expect Abbott Laboratories to grow its dividend payments by around 10% a year, in line with expected earnings-per-share growth.  Growth prospects are discussed in detail later on in this article.

If the company can grow earnings-per-share at 10% a year, it will have the following yields on cost in the future:

Based on a 2.1% dividend yield and a 10% growth rate, Abbott Laboratories has a dividend payback period of 19 years.

It is very likely that Abbott Laboratories will continue paying increasing dividends in the future based on its conservative payout ratio and commitment to dividend increases.