Published on December 3, 2015 at 4:10 pm by Sure Dividend in Dividend Stocks, News, Stock Analysis

The news releaseEmerson Electric Co. (NYSE:EMR) revealed on June 30th of 2015 will forever transform the company.

Here’s the critical part of the company’s release:

“ST. LOUIS, June 30, 2015 – Emerson today announced it plans to spin off its Network Power business via a tax-free distribution to shareholders as part of a plan to streamline its portfolio, drive growth, and accelerate value creation for shareholders. Emerson will also explore strategic alternatives for its motors and drives, power generation and remaining storage businesses.” 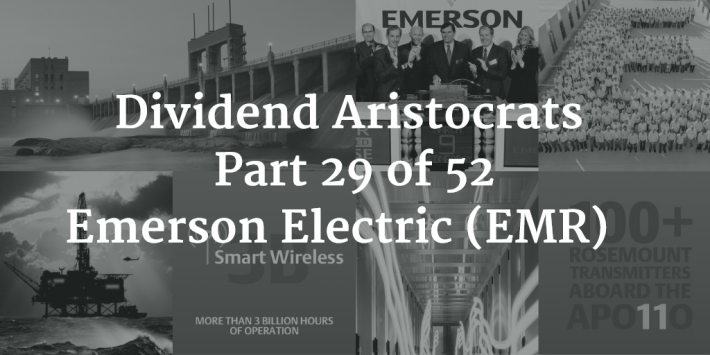 A total of 34 funds from the Insider Monkey database held around 2.30% of Emerson Electric’s outstanding stock at the end of September, which is not a very bullish signal. Moreover, the number of funds with long positions declined by six during the third quarter, but the total value of their holdings advanced to $682.18 million from $434.98 million. On the top of the list, Charles De Vaulx’s International Value Advisers owns 2.69 million shares of Emerson Electric, followed by David E. Shaw’s D. E. Shaw with a stake containing 2.50 million shares.

The company was founded in 1890 and has paid increasing dividends for 59 consecutive years.  Emerson Electric is one of only 17 Dividend Kings.

The company’s plan to spin-off the Network Power Division, and potentially several other business units will reshape Emerson Electric.

The effects of this restructuring are discussed in this article.  First, let’s get to know Emerson Electric as it is currently.

As it is currently, Emerson Electric has over 130,000 employees and 230 manufacturing facilities around the world.

Emerson Electric divides its operations into 5 segments which represent its various business ventures.  The 5 segments are listed out below:

Climate Technologies
The climate technologies segment is the world’s leading provider of heating, ventilation, air conditioning, and refrigeration products for commercial, residential, and industrial applications.  The segment operates under a variety of brand names including Emerson, Browning, Copeland, Dixell, and White-Rodgers.

The company’s large size and global reach give it a significant scale advantage over smaller competitors.

Emerson Electric’s 230 manufacturing facilities spread throughout the world show the strength and geographic diversity of the company’s supply chain.

About 40% of the company’s revenue is generated in emerging markets.  Emerson Electric’s size and scale advantage allows it to find the best locations to manufacture products at the cheapest prices.

-2012 research and development spending of $547 million

-2013 research and development spending of $576 million

-2014 research and development spending of $541 million

The company’s large size lets it hire more innovators to come up with new patentable products which the company can sell at a premium price.