Published on November 17, 2015 at 4:45 pm by Sure Dividend in Dividend Stocks, News, Stock Analysis

Becton Dickinson and Co (NYSE:BDX) was founded in 1897 and has increased its dividend payments for 43 consecutive years.

The company’s longevity speaks to the stability of the medical devices and supply industry in which BDX operates.

While that longevity is appealing to many investors, there was a notable move out of the stock during the second quarter by the firms tracked by Insider Monkey. 35 of them were long BDX on June 30, down from 49 on March 31. The value of their holdings also declined by $266 million to $1.37 billion, though shares suffered only minimal losses during the quarter of less than 2%. Those positions accounted for just 4.60% of the company’s common stock, leaving top hedge funds underweight BDX. Jim Simons’ quant fund Renaissance Technologies continued to pare its position in BDX during the third quarter, by 11% to just over 1.62 million shares. That followed RenTech trimming 7% of its position in the stock during the second quarter and cutting 27% of it during the first quarter. 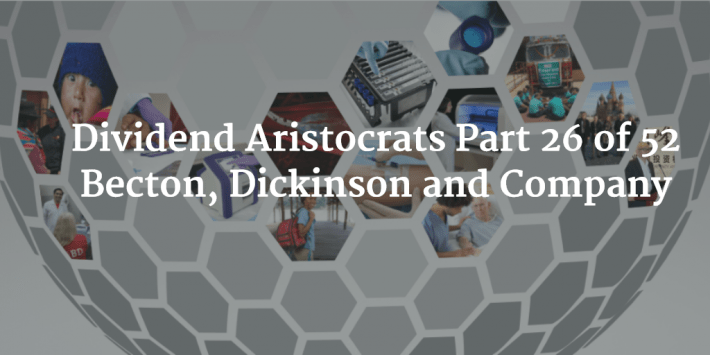 When I last analyzed the company, it had recently announced that it would be acquiring CareFusion. The company was ranked as a Top 10 dividend stock using The 8 Rules of Dividend Investing. Since that time, BDX stock has gained 17.9%, versus 7.9% for the S&P 500.

BDX has a long growth runway ahead. Does the company’s dividend yield and valuation make it a compelling purchase today, or should potential shareholders wait for a better entry point?  Keep reading to find out.

The image below shows BDX’ business broken down by segment and operating unit: 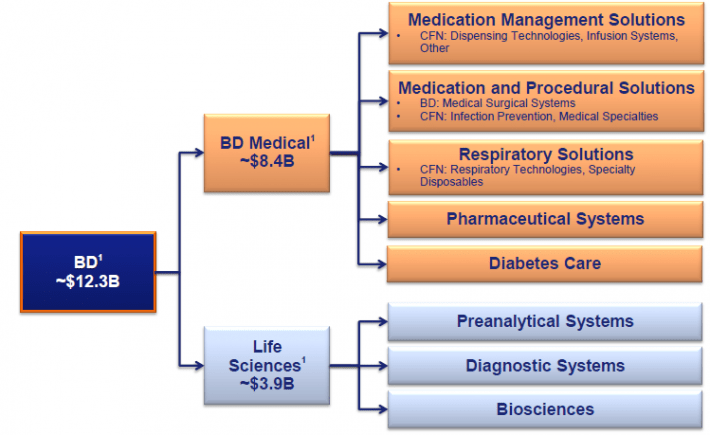 New entrants to the medical supplies industry would find it costly and difficult to recreate BDX’s global supply chain and relationships with customers.

BDX has a long history of innovation. The company’s ability to generate revenue from new products and market them through its established distribution network is a competitive advantage that fuels growth for the company. The image below shows the new products the company has planned for the following year: 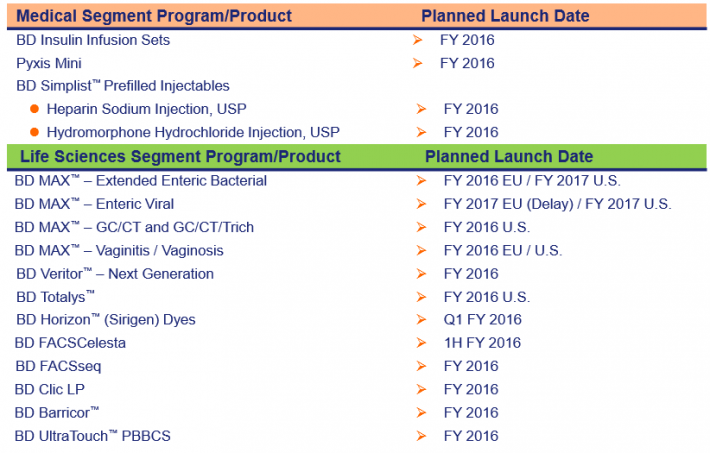 BDX has grown its earnings-per-share at compound rate of 10.4% a year since 1999. The company’s growth is a result of product innovation, acquisitions, and favorable trends in the health care industry.

In March of 2015, BDX completed its acquisition of Carefusion for $12.6 billion – about 40% of BDX’s market cap.  The acquisition has reshaped BDX by giving it an even deeper portfolio of medical devices and more global reach.

It has also created significant cost-cutting opportunities. Cost reductions will be the biggest growth driver for BDX in 2016. The company’s management is now projecting currency neutral earnings-per-share growth of around 17% in fiscal 2016.