Published on November 6, 2015 at 11:26 am by Sure Dividend in Dividend Stocks, News, Stock Analysis

Chubb Corp (NYSE:CB) is one of the older insurance companies in North America. The company was founded in 1882 and has grown its dividend payments for 33 consecutive years.

Chubb sells home, car, business, and supplemental health insurance policies through its network of independent agents and brokers located in North and South America, Australia, Europe and Asia. The company operates in 3 primary segments.  Each segment is shown below along with a brief description of the types of insurance it covers:

Despite its global network of independent agents, Chubb is primarily a United States company.  Chubb generates around 75% of its premium revenue in the United States.

Among the 730 elite investment firms tracked by Insider Monkey, 25 of them held stakes in Chubb valued at $348.49 million. Sentiment for the stock among the overall pool of investors we track was slightly stronger during the quarter, as two more firms were long Chubb, while the value of their holdings increased by about 10% despite the stock declining by about 5% during the quarter. David Harding’s Winton Capital Management was one of those bullish investors, making his position a little more chubby by increasing the size of it by 82% during the second quarter to over 847,000 shares. In fact, the top seven shareholders of the stock within our database as of June 30 all increased their positions in it during the quarter.

Chubb is the 5th largest publicly traded property and casualty insurer in the United States based on its market cap of $29.4 billion.  The company’s larger rivals are listed below:

The Most Important Insurance Metric

A combined ratio under 100% means the company’s insurance operations are profitable without additional investment income.

When a company has a combined ratio under 100% that means it gets paid to invest its float. This is like receiving a negative interest rate loan you can invest into interest bearing (or dividend paying) securities. 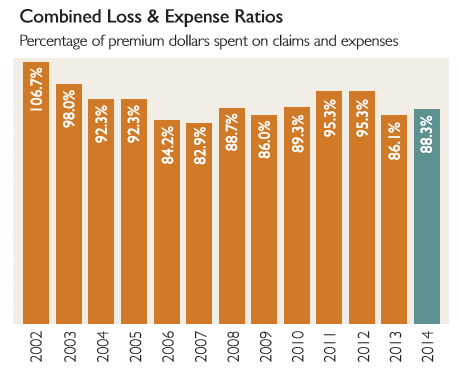