Published on October 21, 2015 at 1:52 pm by Sure Dividend in Dividend Stocks, News, Stock Analysis

McCormick & Company, Incorporated (NYSE:MKC) is a leading global provider of spices, seasonings, condiments, and flavors. The company was founded in 1889 and has increased its dividend payments for 28 consecutive years.

The company has assembled a large portfolio of high quality brands.  The image below shows many of the company’s easily recognizable spice and flavoring brands. 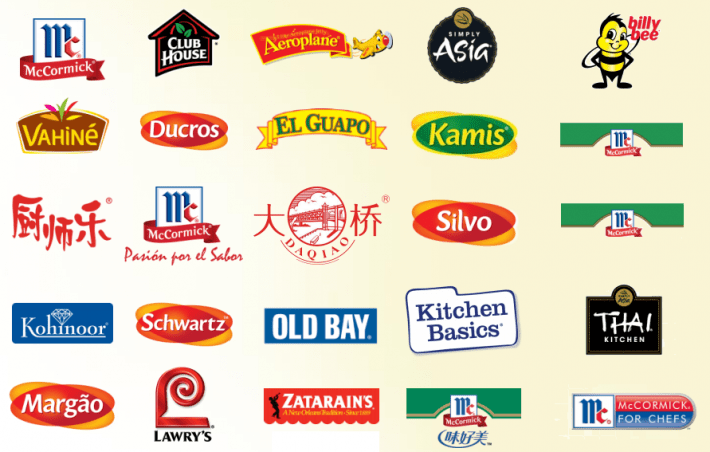 The spice and seasonings industry is especially appealing for long-term investors. The industry changes very slowly.  After all, technology does not radically alter the spice and seasoning industry. However, despite this appeal, the company has remained under the radars of most smart money investors. Out of more than 730 funds that we track, a total of 17 reported long positions in the company, while the aggregate value of their holdings stood at $66.06 million at the end of June. In this way, these investors held just 0.60% of McCormick’s outstanding stock. The top shareholder of McCormick in our list was Cliff Asness‘ AQR Capital Management, which held 320,500 shares, followed by Jim Simons’ Renaissance Technologies with 150,900 shares.

McCormick & Company is about four times as large as its next largest competitor. The company has 22% market share in the global spices and seasonings industry.

Spices are commodity products.  Salt with a McCormick label on it is the same as salt with a different company’s label on it.  Despite this, McCormick has managed to generate operating margins over 15% for all of the last decade.  The company has successfully differentiated itself from its competitors.

The company’s primary competitive advantage comes from its well-known brands coupled with its industry leading size.  The image below shows the market position of many of the company’s leading brands:

McCormick & Company, Incorporated (NYSE:MKC) spends about 5% of its revenue a year on advertising.  This is a substantial advantage, but it is insurmountable when one considers that McCormick is about four times as large as its next largest competitor.

McCormick & Company expects to generate total returns for shareholders of 11% to 13% a year going forward.

The company plans to do this by growing earnings-per-share at 9% to 11% a year and paying a ~2% dividend.

Over the last decade, the company’s growth has come primarily from a mix of:

For the company to hit its growth targets, it will have to continue growing sales at around 6% a year, while increasing margins by 2% a year and reducing its share count by 2% a year as well.

A better estimate of total returns going forward for McCormick & Company is as follows:

This comes to expected total returns of 9% to 12% going forward – 1.5 percentage points off from management’s expectations on average.