Published on October 21, 2016 at 1:36 pm by Sure Dividend in Dividend Stocks, News, Stock Analysis

Nucor Corporation (NYSE:NUE) is a U.S. steel giant. It is the largest steel producer in the U.S., with annual capacity of more than 27 million tons of steel. It is also the largest recycler in the U.S.

But Nucor was not always an industry leader. It started out in 1905, when Ransom E. Olds, creator of the Oldsmobile automobile, left his own automotive company over a dispute with shareholders. He would soon form REO Motor Company, which would eventually evolve into a company called the Nuclear Corporation of America—and thus, Nucor was born.

Nucor rose to prominence by taking a different approach than every other steel company. While most in the steel industry used old blast-furnace based production, Nucor pivoted toward a new technology of mini-mills. This provided the company with more financial flexibility.

The company has realized tremendous success. Nucor has increased its dividend each year for 43 consecutive years…

This makes the company one of only 50 Dividend Aristocrats (1) – stocks with 25+ years of consecutive dividend increases in the S&P 500.

While Nucor’s historical dividend growth is very impressive, the company’s results over the last decade have been less than stellar. 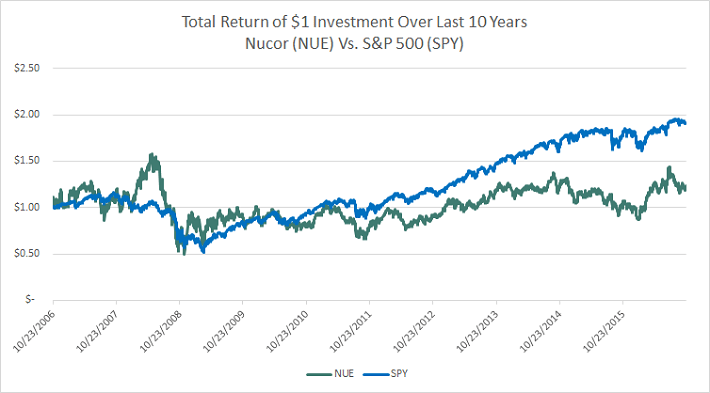 The truth is that imported steal has hurt the steel industry in the United States (but its not China that’s doing most of the importing). Nucor’s earnings-per-share were at $5.73 in 2006. In 2015, they had declined to $1.11. In 2015, earnings-per-share did not cover the company’s dividend (but that’s very likely to not be the case in 2016).

There’s no question Nucor is riskier than the ‘average’ (which is exceptional) Dividend Aristocrat. The company does offer investors an above-average 3.1% dividend yield. Keep reading this article to learn more about the investment prospects of Nucor.