Like everyone else, elite investors make mistakes. Some of their top consensus picks, such as Amazon, Facebook and Alibaba, have not done well in October due to various reasons. Nevertheless, the data show elite investors’ consensus picks have done well on average over the long-term. The top 30 S&P 500 stocks among hedge funds at the end of September 2018 returned an average of 6.7% through November 15th whereas the S&P 500 Index ETF gained only 2.6% during the same period. Because their consensus picks have done well, we pay attention to what elite funds think before doing extensive research on a stock. In this article, we take a closer look at DISH Network Corp. (NASDAQ:DISH) from the perspective of those elite funds.

Is DISH Network Corp. (NASDAQ:DISH) a healthy stock for your portfolio? Hedge funds are becoming hopeful. The number of long hedge fund positions moved up by 3 lately. Our calculations showed that DISH isn’t among the 30 most popular stocks among hedge funds however, though it was far more popular among billionaires, ranking within the top 20 among the 30 Stocks Billionaires Are Crazy About: Insider Monkey Billionaire Stock Index.

What does the smart money think about DISH Network Corp. (NASDAQ:DISH)? 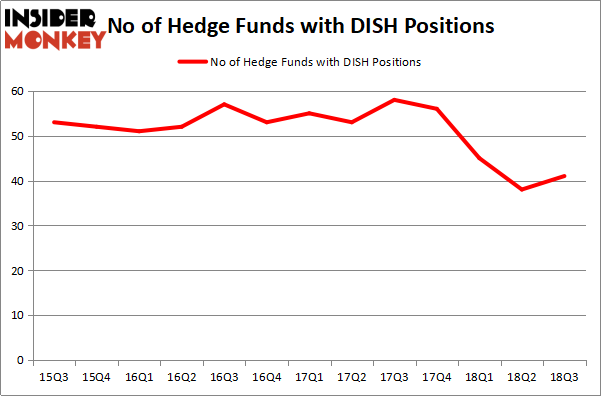 More specifically, Eagle Capital Management was the largest shareholder of DISH Network Corp. (NASDAQ:DISH), with a stake worth $547.5 million reported as of the end of September. Trailing Eagle Capital Management was King Street Capital, which amassed a stake valued at $486.6 million. Paulson & Co, Millennium Management, and GAMCO Investors were also very fond of the stock, giving the stock large weights in their portfolios.

As you can see these stocks had an average of 23 hedge funds with bullish positions and the average amount invested in these stocks was $882 million. That figure was $1.97 billion in DISH’s case. Cardinal Health, Inc. (NYSE:CAH) is the most popular stock in this table. On the other hand Principal Financial Group Inc (NYSE:PFG) is the least popular one with only 15 bullish hedge fund positions. Compared to these stocks DISH Network Corp. (NASDAQ:DISH) is more popular among hedge funds. Considering that hedge funds are fond of this stock in relation to its market cap peers, it may be a good idea to analyze it in detail and potentially include it in your portfolio.