Discovery Communications Inc. (DISCA): Has This Network Jumped the Shark?

The term “jumping the shark” started when the successful Happy Days show, after years of every possible plot point, decided to show the “Fonz” waterskiing and literally jumping over a shark. The show went south rapidly.

I fear Discovery Communications Inc. (NASDAQ:DISCA) is perilously close to jumping the shark despite how much we all love its Shark Week returning August 4 with all things shark. Relying on sharks to save your butt didn’t work for Happy Days and may not work for Discovery Channel.

Discovery Channel is the world’s largest unscripted content network. Its biggest hits are number one Here Comes Honey Boo-Boo, Gold Rush, Amish Mafia, Hoarders, Breaking Amish, and similarly dysfunctional or outlier lifestyle reality shows. It has a joint venture with OWN, the Oprah Winfrey Network which just inked a $2 million deal for bad girl Lindsay Lohan to get grilled by Oprah. Look for Lohan to star in Here Comes Amish Sharks! (just kidding, no such show).

The ongoing saga of Alana Thompson, aka Honey Boo-Boo, and her self-professed redneck family was the water-cooler sensation of last season with its cringeworthy but occasional heart-warming moments. Especially, the “sketti” episode, in which the family made spaghetti with margarine and catsup. (Reagan was right, it is a vegetable!) The buzz continues with Honey Boo Boo watch-and-sniff cards being distributed in celebrity magsUs and People to be sniffed concurrent to watching the season premiere on July 17.

Yet, shareholders have every reason to cheer the little tyke as Discovery Communications Inc. (NASDAQ:DISCA)’ stock has surged 66.75% this last year. Since the move into reality based programming away from its previous educational PBS-like bent the stock is a seven-bagger since 2009.

However, reality shows like these have their inevitable jump the shark moment. After initial buzz ratings droop and so might the stock. Are there really enough telegenic Amish thugs, smugglers, polygamists, and cupcakery entrepreneurs to sustain and carry the rest of the network’s more serious offerings like Inside the Wormhole narrated by Morgan Freeman? (You know it’s serious with Morgan Freeman.)

One less promising trend at Discovery Communications Inc. (NASDAQ:DISCA) is their entry into scripted fictional programming. Reality shows, cheaper to create and popular among women aged 18-49, have been such a winning formula that shareholders should take notice of the change. This move into scripted content makes this a less compelling storyline, adding more risk to this name. 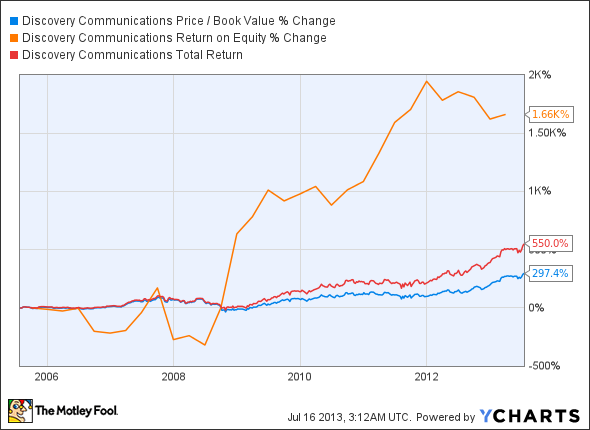 International is now the focus at Discovery Communications Inc. (NASDAQ:DISCA) with better sales growth than domestic; total international revenue growth has been 15%, compared to domestic growth of 5%. Discovery Communications Inc. (NASDAQ:DISCA)’s big news this year was its Nordic Channels purchase getting 12 Scandinavian TV networks from ProSieben Sat. 1 Group for $1.7 billion. It also bought a 20% stake in TF1 Eurosport Group of France, including four French subscriber channels. CEO David Zaslav said both deals would be immediately accretive.

The Nordic Channels will give Discovery fictional content and expand their sports programming footprint with Europsort Group. This is a promising move as ESPN has been a major profit driver, practically the jewel in the crown, for The Walt Disney Company (NYSE:DIS)‘s Broadcast division.

Zombies vs sharks vs cutthroats