Did You Catch Apple Inc (AAPL)’s Hilarious ‘Apology’ to Samsung?

Apple Inc (NASDAQ:AAPL) has been in the news quite a bit recently, and from the company’s product release show on Tuesday to its earnings report yesterday, our coverage has been extensive. In case you’re still down in the dumps about Apple’s Q4 financials, maybe this will cheer you up. A story that originally began circulating around the blogosphere at lunchtime today, Apple Inc (NASDAQ:AAPL) has finally responded to a U.K. appellate court that upheld Judge Colin Birss’s ruling that Samsung did not infringe on its design patents. You may remember this case as the one in which Birss said that Samsung’s tablets and smartphones were simply “not as cool” as Apple’s iPad and iPhone devices.

Regarding the decision by the U.K. Court of Appeal a couple weeks ago, we wrote that:

The panel of three appellate judges said in its decision, “Because this case (and parallel cases in other countries) has generated much publicity, it will avoid confusion to say what this case is about and not about. It is not about whether Samsung copied Apple Inc (NASDAQ:AAPL)’s iPad. Infringement of a registered design does not involve any question of whether there was copying: the issue is simply whether the accused design is too close to the registered design according to the tests laid down in the law. … So this case is all about, and only about, Apple’s registered design and the Samsung products.”

In his original case, Birss told Apple Inc (NASDAQ:AAPL) to make public an acknowledgement of the decision, an order that the appellate court agreed with, stating that it “must come from the horse’s mouth. Nothing short of that will be sure to do the job completely.”

Well, the “horse’s mouth” has spoken, and here’s what Apple Inc (NASDAQ:AAPL) had to say on its U.K. domain name: 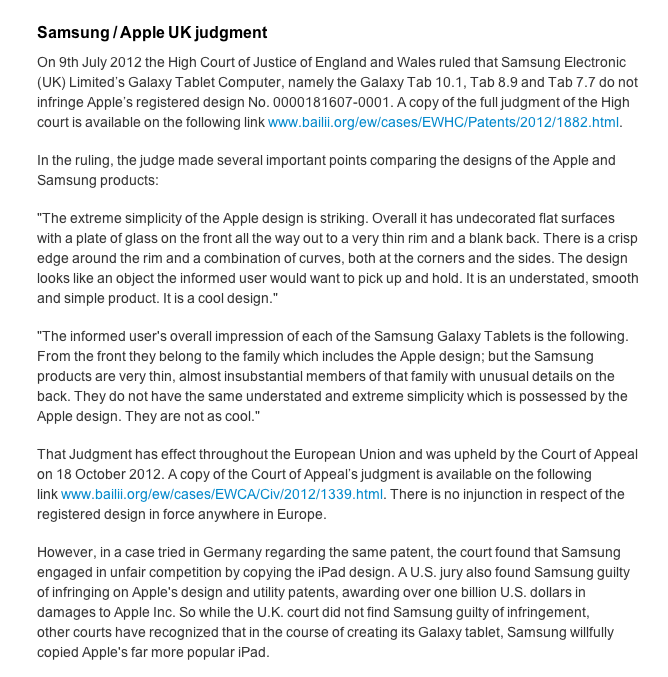 Note: the document above is taken from Apple Inc (NASDAQ:AAPL)’s U.K. website, and can be seen in full by clicking here.

The first thing that can be noticed about Apple Inc (NASDAQ:AAPL)’s acknowledgement is its inclusion of the original ruling made by Birss, essentially stating that Samsung’s designs aren’t similar to Apple’s because “they are not as cool.” More interestingly, though, is the last paragraph of the document, which mentions the rulings of other courts that have been in the company’s favor, ending with this nugget: “So while the U.K. court did not find Samsung guilty of infringement, other courts have recognized that in the course of creating its Galaxy tablet, Samsung willingly copied Apple’s far more popular iPad.”

As noted in the title, we thought it was a bit hilarious that Apple chose to structure the document in this way. What are your initial reactions to Apple Inc (NASDAQ:AAPL)’s “acknowledgement” of the U.K. Court of Appeal’s ruling? Is it too heavy, just right, or not strong enough? Was the last paragraph necessary to include, and does it taint the document in any way? Don’t be afraid to speak up; there are sure to be many opinions on this matter.