The gold rush of 1849 — whence the “49er” moniker derives — may be long over, but might the San Francisco 49ers’ loss during Super Bowl XLVII signal the beginning of the next move higher for the gold market?

According to a fanciful stock market prognostication tool known as the Super Bowl indicator, if the NFC wins, the market should be up for the remainder of the year, while an AFC victory signals a market decline. One of the biggest enemies of gold’s attempts to go higher over the last few months has been the strength in the stock market. By losing Sunday’s close-fought battle, the 49ers may have struck again.

The indicator
Just to be clear, I am being tongue-in-cheek by suggesting that this is an indicator on which to base real trading decisions, but as it does have some psychological influence on how traders will at least start the week, it’s worth a brief look. The Super Bowl indicator, which was accurate 28 out of 31 years between 1967 and 1997, has an overall accuracy rate of about 75%. Adding to the fun is that it poses an interesting dilemma for this year’s winner.

But it gets confusing when you consider that the Baltimore Ravens’ history can be traced to the first Cleveland Browns franchise, which was in the original NFL before the AFL-NFL merger. Most teams in the old NFL became NFC teams after the merger — but not the Browns, which entered the consolidated NFL as an AFC team. If you wanted to take a purist position, you might argue that the team should be counted as an NFC team. However, as the San Francisco 49ers proudly represented the NFC, the honors this year must go to the AFC. As such, the uptrend in stocks should reverse if the indicator holds.

Good news for gold
Looking at a chart of gold, as represented by the SPDR Gold Trust (ETF) (NYSEMKT:GLD) , relative to the S&P 500, as represented by the SPDR S&P 500 , there has been strong negative correlation between the two markets. As stocks have ticked higher, gold has taken a break from its extended uptrend. A correction or reversal in the direction of the stock market should be seen as a major positive for precious metals such as gold. 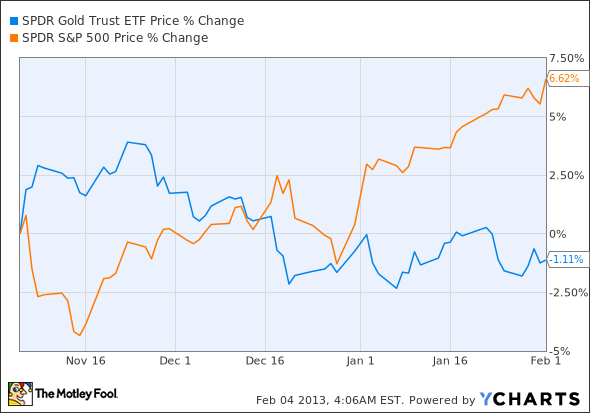 Other positive news for the gold market is the general weakness that exists in the economy. Last week saw a negative print for the U.S. gross domestic product (GDP) and an uptick in the unemployment rate. While the market ignored the news, surging higher to close above 14,000 on the Dow for the first time since October 2007, it’s unlikely that the Federal Reserve missed the report. Remember that the Fed has vowed to keep the money-printing machine, also known as bond buying and quantitative easing, running full tilt until the unemployment rate falls below 6.5%. At this rate, I expect that the printing will continue until heavy inflation kicks in and sends gold higher.