The latest 13F reporting period has come and gone, and Insider Monkey have plowed through 821 13F filings that hedge funds and well-known value investors are required to file by the SEC. The 13F filings show the funds’ and investors’ portfolio positions as of March 31st, a week after the market trough. Now, we are almost done with the second quarter. Investors decided to bet on the economic recovery and a stock market rebound. S&P 500 Index returned almost 20% this quarter. In this article you are going to find out whether hedge funds thoughtResideo Technologies, Inc. (NYSE:REZI) was a good investment heading into the second quarter and how the stock traded in comparison to the top hedge fund picks.

Resideo Technologies, Inc. (NYSE:REZI) has seen an increase in enthusiasm from smart money of late. REZI was in 25 hedge funds’ portfolios at the end of the first quarter of 2020. There were 21 hedge funds in our database with REZI positions at the end of the previous quarter. Our calculations also showed that REZI isn’t among the 30 most popular stocks among hedge funds (click for Q1 rankings and see the video for a quick look at the top 5 stocks).

At Insider Monkey we scour multiple sources to uncover the next great investment idea. For example, on one site we found out that NBA champion Isiah Thomas is now the CEO of this cannabis company. The same site also talks about a snack manufacturer that’s growing at 30% annually. Even though we recommend positions in only a tiny fraction of the companies we analyze, we check out as many stocks as we can. We read hedge fund investor letters and listen to stock pitches at hedge fund conferences. Hedge fund sentiment towards Tesla reached its all time high at the end of 2019 and Tesla shares more than tripled this year. We are trying to identify other EV revolution winners, so if you have any good ideas send us an email. Now let’s take a peek at the recent hedge fund action regarding Resideo Technologies, Inc. (NYSE:REZI).

Heading into the second quarter of 2020, a total of 25 of the hedge funds tracked by Insider Monkey held long positions in this stock, a change of 19% from one quarter earlier. Below, you can check out the change in hedge fund sentiment towards REZI over the last 18 quarters. With the smart money’s sentiment swirling, there exists a select group of noteworthy hedge fund managers who were adding to their holdings significantly (or already accumulated large positions). 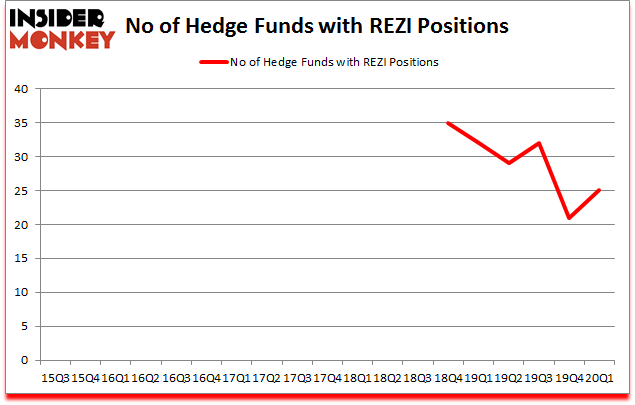 More specifically, Praesidium Investment Management Company was the largest shareholder of Resideo Technologies, Inc. (NYSE:REZI), with a stake worth $43 million reported as of the end of September. Trailing Praesidium Investment Management Company was Freshford Capital Management, which amassed a stake valued at $40.8 million. Starboard Value LP, GAMCO Investors, and Carlson Capital were also very fond of the stock, becoming one of the largest hedge fund holders of the company. In terms of the portfolio weights assigned to each position Freshford Capital Management allocated the biggest weight to Resideo Technologies, Inc. (NYSE:REZI), around 10.28% of its 13F portfolio. Proxima Capital Management is also relatively very bullish on the stock, setting aside 5.7 percent of its 13F equity portfolio to REZI.

As one would reasonably expect, specific money managers have jumped into Resideo Technologies, Inc. (NYSE:REZI) headfirst. Starboard Value LP, managed by Jeffrey Smith, established the most outsized position in Resideo Technologies, Inc. (NYSE:REZI). Starboard Value LP had $12.7 million invested in the company at the end of the quarter. Peter Rathjens, Bruce Clarke and John Campbell’s Arrowstreet Capital also made a $4.3 million investment in the stock during the quarter. The other funds with new positions in the stock are Ed Bosek’s BeaconLight Capital, Ken Griffin’s Citadel Investment Group, and Israel Englander’s Millennium Management.

As you can see these stocks had an average of 9.5 hedge funds with bullish positions and the average amount invested in these stocks was $40 million. That figure was $151 million in REZI’s case. Boston Private Financial Hldg Inc (NASDAQ:BPFH) is the most popular stock in this table. On the other hand China Online Education Group (NYSE:COE) is the least popular one with only 4 bullish hedge fund positions. Compared to these stocks Resideo Technologies, Inc. (NYSE:REZI) is more popular among hedge funds. Our calculations showed that top 10 most popular stocks among hedge funds returned 41.4% in 2019 and outperformed the S&P 500 ETF (SPY) by 10.1 percentage points. These stocks returned 12.3% in 2020 through June 30th but still managed to beat the market by 15.5 percentage points. Hedge funds were also right about betting on REZI as the stock returned 142.1% in Q2 and outperformed the market by an even larger margin. Hedge funds were clearly right about piling into this stock relative to other stocks with similar market capitalizations.