The latest 13F reporting period has come and gone, and Insider Monkey is again at the forefront when it comes to making use of this gold mine of data. We at Insider Monkey have plowed through 821 13F filings that hedge funds and well-known value investors are required to file by the SEC. The 13F filings show the funds’ and investors’ portfolio positions as of March 31st, a week after the market trough. We are almost done with the second quarter. Investors decided to bet on the economic recovery and a stock market rebound. S&P 500 Index returned almost 20% this quarter. In this article we look at how hedge funds traded KLA Corporation (NASDAQ:KLAC) and determine whether the smart money was really smart about this stock.

KLA Corporation (NASDAQ:KLAC) has seen a decrease in enthusiasm from smart money in recent months. KLAC was in 26 hedge funds’ portfolios at the end of March. There were 30 hedge funds in our database with KLAC positions at the end of the previous quarter. Our calculations also showed that KLAC isn’t among the 30 most popular stocks among hedge funds (click for Q1 rankings and see the video for a quick look at the top 5 stocks).

In the eyes of most traders, hedge funds are seen as unimportant, outdated investment tools of the past. While there are more than 8000 funds with their doors open at present, Our experts choose to focus on the bigwigs of this club, around 850 funds. Most estimates calculate that this group of people orchestrate the majority of the smart money’s total asset base, and by tracking their unrivaled stock picks, Insider Monkey has come up with several investment strategies that have historically outperformed the S&P 500 index. Insider Monkey’s flagship short hedge fund strategy outrun the S&P 500 short ETFs by around 20 percentage points per annum since its inception in March 2017. Our portfolio of short stocks lost 36% since February 2017 (through May 18th) even though the market was up 30% during the same period. We just shared a list of 8 short targets in our latest quarterly update .

At Insider Monkey we scour multiple sources to uncover the next great investment idea. There is a lot of volatility in the markets and this presents amazing investment opportunities from time to time. For example, this trader claims to deliver juiced up returns with one trade a week, so we are checking out his highest conviction idea. A second trader claims to score lucrative profits by utilizing a “weekend trading strategy”, so we look into his strategy’s picks. We read hedge fund investor letters and listen to stock pitches at hedge fund conferences. We recently recommended several stocks partly inspired by legendary Bill Miller’s investor letter. Our best call in 2020 was shorting the market when the S&P 500 was trading at 3150 in February after realizing the coronavirus pandemic’s significance before most investors. With all of this in mind we’re going to review the key hedge fund action regarding KLA Corporation (NASDAQ:KLAC).

How have hedgies been trading KLA Corporation (NASDAQ:KLAC)?

At the end of the first quarter, a total of 26 of the hedge funds tracked by Insider Monkey were bullish on this stock, a change of -13% from the fourth quarter of 2019. The graph below displays the number of hedge funds with bullish position in KLAC over the last 18 quarters. With hedgies’ positions undergoing their usual ebb and flow, there exists an “upper tier” of noteworthy hedge fund managers who were increasing their holdings substantially (or already accumulated large positions). 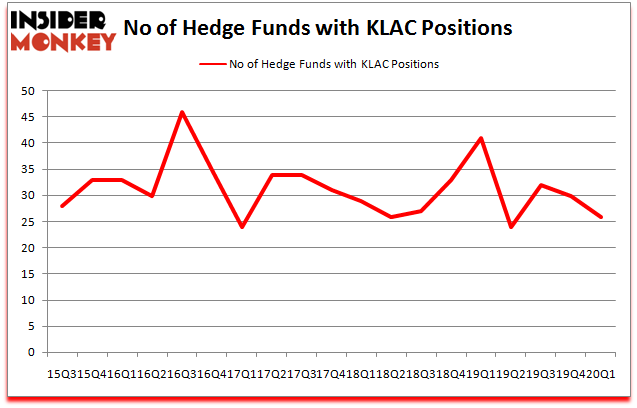 According to publicly available hedge fund and institutional investor holdings data compiled by Insider Monkey, Panayotis Takis Sparaggis’s Alkeon Capital Management has the largest position in KLA Corporation (NASDAQ:KLAC), worth close to $129.1 million, comprising 0.6% of its total 13F portfolio. On Alkeon Capital Management’s heels is Adage Capital Management, managed by Phill Gross and Robert Atchinson, which holds a $78.5 million position; the fund has 0.2% of its 13F portfolio invested in the stock. Some other peers with similar optimism comprise Patrick Degorce’s Theleme Partners, Cliff Asness’s AQR Capital Management and Israel Englander’s Millennium Management. In terms of the portfolio weights assigned to each position Blue Grotto Capital allocated the biggest weight to KLA Corporation (NASDAQ:KLAC), around 4.19% of its 13F portfolio. Theleme Partners is also relatively very bullish on the stock, setting aside 2.98 percent of its 13F equity portfolio to KLAC.

Judging by the fact that KLA Corporation (NASDAQ:KLAC) has witnessed a decline in interest from hedge fund managers, logic holds that there exists a select few funds who were dropping their entire stakes by the end of the first quarter. It’s worth mentioning that Michael Rockefeller and KarláKroeker’s Woodline Partners sold off the biggest position of all the hedgies followed by Insider Monkey, comprising about $26.9 million in stock, and Neal Nathani and Darren Dinneen’s Totem Point Management was right behind this move, as the fund dumped about $19.7 million worth. These moves are important to note, as aggregate hedge fund interest dropped by 4 funds by the end of the first quarter.

As you can see these stocks had an average of 45.25 hedge funds with bullish positions and the average amount invested in these stocks was $1880 million. That figure was $383 million in KLAC’s case. McKesson Corporation (NYSE:MCK) is the most popular stock in this table. On the other hand Agilent Technologies Inc. (NYSE:A) is the least popular one with only 35 bullish hedge fund positions. Compared to these stocks KLA Corporation (NASDAQ:KLAC) is even less popular than A. Hedge funds clearly dropped the ball on KLAC as the stock delivered strong returns, though hedge funds’ consensus picks still generated respectable returns. Our calculations showed that top 10 most popular stocks among hedge funds returned 41.4% in 2019 and outperformed the S&P 500 ETF (SPY) by 10.1 percentage points. These stocks gained 12.3% in 2020 through June 30th and still beat the market by 15.5 percentage points. A small number of hedge funds were also right about betting on KLAC as the stock returned 36% in the second quarter and outperformed the market by an even larger margin.