We know that hedge funds generate strong, risk-adjusted returns over the long run, which is why imitating the picks that they are collectively bullish on can be a profitable strategy for retail investors. With billions of dollars in assets, professional investors have to conduct complex analyses, spend many resources and use tools that are not always available for the general crowd. This doesn’t mean that they don’t have occasional colossal losses; they do. However, it is still a good idea to keep an eye on hedge fund activity. With this in mind, let’s examine the smart money sentiment towards Kilroy Realty Corp (NYSE:KRC) and determine whether hedge funds skillfully traded this stock.

Kilroy Realty Corp (NYSE:KRC) was in 20 hedge funds’ portfolios at the end of March. KRC shareholders have witnessed an increase in enthusiasm from smart money lately. There were 18 hedge funds in our database with KRC holdings at the end of the previous quarter. Our calculations also showed that KRC isn’t among the 30 most popular stocks among hedge funds (click for Q1 rankings and see the video for a quick look at the top 5 stocks).

At Insider Monkey we scour multiple sources to uncover the next great investment idea. We go through lists like the 10 most profitable companies in the world to pick the best large-cap stocks to buy. Even though we recommend positions in only a tiny fraction of the companies we analyze, we check out as many stocks as we can. We read hedge fund investor letters and listen to stock pitches at hedge fund conferences. If you want to find out the best healthcare stock to buy right now, you can watch our latest hedge fund manager interview here. Now we’re going to take a peek at the recent hedge fund action encompassing Kilroy Realty Corp (NYSE:KRC).

At Q1’s end, a total of 20 of the hedge funds tracked by Insider Monkey held long positions in this stock, a change of 11% from the previous quarter. Below, you can check out the change in hedge fund sentiment towards KRC over the last 18 quarters. With the smart money’s sentiment swirling, there exists a select group of noteworthy hedge fund managers who were adding to their stakes considerably (or already accumulated large positions). 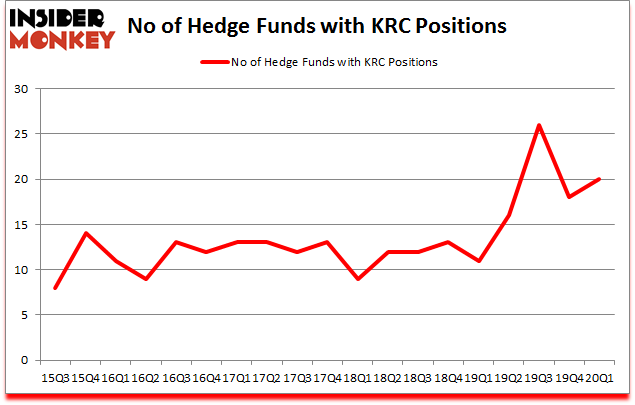 The largest stake in Kilroy Realty Corp (NYSE:KRC) was held by Long Pond Capital, which reported holding $54 million worth of stock at the end of September. It was followed by Millennium Management with a $30.4 million position. Other investors bullish on the company included D1 Capital Partners, Owl Creek Asset Management, and Citadel Investment Group. In terms of the portfolio weights assigned to each position Hill Winds Capital allocated the biggest weight to Kilroy Realty Corp (NYSE:KRC), around 5.85% of its 13F portfolio. Pinz Capital is also relatively very bullish on the stock, designating 4.36 percent of its 13F equity portfolio to KRC.

With a general bullishness amongst the heavyweights, some big names were breaking ground themselves. D1 Capital Partners, managed by Daniel Sundheim, established the largest position in Kilroy Realty Corp (NYSE:KRC). D1 Capital Partners had $24.7 million invested in the company at the end of the quarter. Jeffrey Altman’s Owl Creek Asset Management also made a $18.9 million investment in the stock during the quarter. The other funds with brand new KRC positions are Eduardo Abush’s Waterfront Capital Partners, Matthew L Pinz’s Pinz Capital, and Alec Litowitz and Ross Laser’s Magnetar Capital.

As you can see these stocks had an average of 27.25 hedge funds with bullish positions and the average amount invested in these stocks was $584 million. That figure was $181 million in KRC’s case. Hill-Rom Holdings, Inc. (NYSE:HRC) is the most popular stock in this table. On the other hand Royal Caribbean Cruises Ltd. (NYSE:RCL) is the least popular one with only 25 bullish hedge fund positions. Compared to these stocks Kilroy Realty Corp (NYSE:KRC) is even less popular than RCL. Hedge funds dodged a bullet by taking a bearish stance towards KRC. Our calculations showed that the top 10 most popular hedge fund stocks returned 41.4% in 2019 and outperformed the S&P 500 ETF (SPY) by 10.1 percentage points. These stocks gained 18.6% in 2020 through July 27th but managed to beat the market by 17.1 percentage points. Unfortunately KRC wasn’t nearly as popular as these 10 stocks (hedge fund sentiment was very bearish); KRC investors were disappointed as the stock returned -10.1% since Q1 and underperformed the market. If you are interested in investing in large cap stocks with huge upside potential, you should check out the top 10 most popular stocks among hedge funds as most of these stocks already outperformed the market so far in 2020.