The latest 13F reporting period has come and gone, and Insider Monkey is again at the forefront when it comes to making use of this gold mine of data. We at Insider Monkey have plowed through 821 13F filings that hedge funds and well-known value investors are required to file by the SEC. The 13F filings show the funds’ and investors’ portfolio positions as of March 31st, a week after the market trough. We are almost done with the second quarter. Investors decided to bet on the economic recovery and a stock market rebound. S&P 500 Index returned almost 20% this quarter. In this article we look at how hedge funds traded Globant SA (NYSE:GLOB) and determine whether the smart money was really smart about this stock.

Globant SA (NYSE:GLOB) was in 17 hedge funds’ portfolios at the end of March. GLOB shareholders have witnessed a decrease in hedge fund interest of late. There were 18 hedge funds in our database with GLOB holdings at the end of the previous quarter. Our calculations also showed that GLOB isn’t among the 30 most popular stocks among hedge funds (click for Q1 rankings and see the video for a quick look at the top 5 stocks).

At Insider Monkey we scour multiple sources to uncover the next great investment idea. With Federal Reserve creating trillions of dollars out of thin air, we believe gold prices will keep increasing. So, we are checking out gold stocks like this small gold mining company. We go through lists like the 10 most profitable companies in America to pick the best large-cap stocks to buy. Even though we recommend positions in only a tiny fraction of the companies we analyze, we check out as many stocks as we can. We read hedge fund investor letters and listen to stock pitches at hedge fund conferences. If you want to find out the best healthcare stock to buy right now, you can watch our latest hedge fund manager interview here. Keeping this in mind we’re going to view the fresh hedge fund action surrounding Globant SA (NYSE:GLOB).

What have hedge funds been doing with Globant SA (NYSE:GLOB)?

At the end of the first quarter, a total of 17 of the hedge funds tracked by Insider Monkey were bullish on this stock, a change of -6% from the fourth quarter of 2019. Below, you can check out the change in hedge fund sentiment towards GLOB over the last 18 quarters. So, let’s find out which hedge funds were among the top holders of the stock and which hedge funds were making big moves. 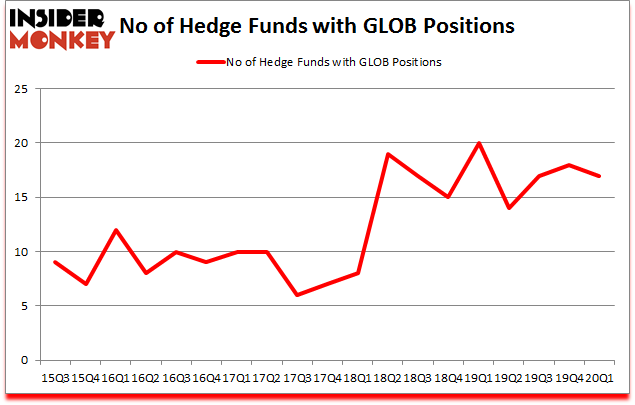 The largest stake in Globant SA (NYSE:GLOB) was held by Fisher Asset Management, which reported holding $44.2 million worth of stock at the end of September. It was followed by Driehaus Capital with a $15.7 million position. Other investors bullish on the company included GLG Partners, Sloane Robinson Investment Management, and Citadel Investment Group. In terms of the portfolio weights assigned to each position Sloane Robinson Investment Management allocated the biggest weight to Globant SA (NYSE:GLOB), around 6.82% of its 13F portfolio. Driehaus Capital is also relatively very bullish on the stock, dishing out 0.53 percent of its 13F equity portfolio to GLOB.

Due to the fact that Globant SA (NYSE:GLOB) has faced declining sentiment from the aggregate hedge fund industry, it’s easy to see that there was a specific group of funds who were dropping their positions entirely heading into Q4. Interestingly, James Dondero’s Highland Capital Management dropped the biggest investment of the “upper crust” of funds tracked by Insider Monkey, comprising an estimated $1.3 million in stock, and Qing Li’s Sciencast Management was right behind this move, as the fund dropped about $0.3 million worth. These bearish behaviors are important to note, as total hedge fund interest fell by 1 funds heading into Q4.

As you can see these stocks had an average of 18 hedge funds with bullish positions and the average amount invested in these stocks was $213 million. That figure was $81 million in GLOB’s case. Axis Capital Holdings Limited (NYSE:AXS) is the most popular stock in this table. On the other hand Gerdau SA (NYSE:GGB) is the least popular one with only 12 bullish hedge fund positions. Globant SA (NYSE:GLOB) is not the least popular stock in this group but hedge fund interest is still below average. Our calculations showed that top 10 most popular stocks among hedge funds returned 41.4% in 2019 and outperformed the S&P 500 ETF (SPY) by 10.1 percentage points. These stocks gained 18.6% in 2020 through July 27th and still beat the market by 17.1 percentage points. A small number of hedge funds were also right about betting on GLOB as the stock returned 93.7% since the end of March and outperformed the market by an even larger margin.