The latest 13F reporting period has come and gone, and Insider Monkey is again at the forefront when it comes to making use of this gold mine of data. We at Insider Monkey have plowed through 821 13F filings that hedge funds and well-known value investors are required to file by the SEC. The 13F filings show the funds’ and investors’ portfolio positions as of March 31st, a week after the market trough. We are almost done with the second quarter. Investors decided to bet on the economic recovery and a stock market rebound. S&P 500 Index returned almost 20% this quarter. In this article we look at how hedge funds traded BP plc (NYSE:BP) and determine whether the smart money was really smart about this stock.

BP plc (NYSE:BP) shareholders have witnessed a decrease in hedge fund interest of late. BP was in 31 hedge funds’ portfolios at the end of March. There were 40 hedge funds in our database with BP holdings at the end of the previous quarter. Our calculations also showed that BP isn’t among the 30 most popular stocks among hedge funds (click for Q1 rankings and see the video for a quick look at the top 5 stocks).

According to most stock holders, hedge funds are seen as slow, old investment tools of yesteryear. While there are over 8000 funds trading today, We hone in on the elite of this club, about 850 funds. These money managers manage the majority of the hedge fund industry’s total capital, and by tailing their matchless picks, Insider Monkey has found numerous investment strategies that have historically defeated the broader indices. Insider Monkey’s flagship short hedge fund strategy outpaced the S&P 500 short ETFs by around 20 percentage points per annum since its inception in March 2017. Our portfolio of short stocks lost 36% since February 2017 (through May 18th) even though the market was up 30% during the same period. We just shared a list of 8 short targets in our latest quarterly update .

At Insider Monkey we scour multiple sources to uncover the next great investment idea. We read hedge fund investor letters and listen to stock pitches at hedge fund conferences. Hedge fund sentiment towards Tesla reached its all time high at the end of 2019 and Tesla shares more than tripled this year. We are trying to identify other EV revolution winners, so we are checking out this tiny lithium stock. With all of this in mind let’s take a glance at the key hedge fund action encompassing BP plc (NYSE:BP). 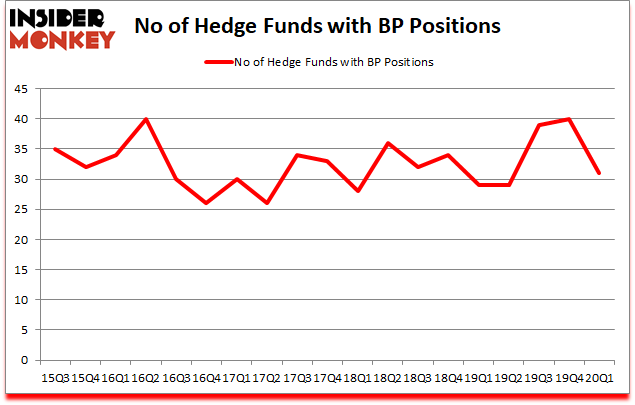 Among these funds, Renaissance Technologies held the most valuable stake in BP plc (NYSE:BP), which was worth $339.1 million at the end of the third quarter. On the second spot was Fisher Asset Management which amassed $230 million worth of shares. Orbis Investment Management, ValueAct Capital, and Citadel Investment Group were also very fond of the stock, becoming one of the largest hedge fund holders of the company. In terms of the portfolio weights assigned to each position Kahn Brothers allocated the biggest weight to BP plc (NYSE:BP), around 7.26% of its 13F portfolio. Stamos Capital is also relatively very bullish on the stock, setting aside 2.69 percent of its 13F equity portfolio to BP.

Because BP plc (NYSE:BP) has witnessed declining sentiment from the entirety of the hedge funds we track, logic holds that there exists a select few fund managers that elected to cut their full holdings heading into Q4. It’s worth mentioning that Dmitry Balyasny’s Balyasny Asset Management dumped the biggest investment of all the hedgies monitored by Insider Monkey, comprising about $40.3 million in stock, and Clint Carlson’s Carlson Capital was right behind this move, as the fund said goodbye to about $16.8 million worth. These bearish behaviors are interesting, as total hedge fund interest was cut by 9 funds heading into Q4.

As you can see these stocks had an average of 41 hedge funds with bullish positions and the average amount invested in these stocks was $1516 million. That figure was $878 million in BP’s case. United Technologies Corporation (NYSE:UTX) is the most popular stock in this table. On the other hand British American Tobacco plc (NYSE:BTI) is the least popular one with only 10 bullish hedge fund positions. BP plc (NYSE:BP) is not the least popular stock in this group but hedge fund interest is still below average. This is a slightly negative signal and we’d rather spend our time researching stocks that hedge funds are piling on. Our calculations showed that top 10 most popular stocks among hedge funds returned 41.4% in 2019 and outperformed the S&P 500 ETF (SPY) by 10.1 percentage points. These stocks gained 12.3% in 2020 through June 30th and surpassed the market by 15.5 percentage points. Unfortunately BP wasn’t nearly as popular as these 10 stocks (hedge fund sentiment was quite bearish); BP investors were disappointed as the stock returned -1.8% during the second quarter and underperformed the market. If you are interested in investing in large cap stocks with huge upside potential, you should check out the top 10 most popular stocks among hedge funds as most of these stocks already outperformed the market in 2020.