Insider Monkey has processed numerous 13F filings of hedge funds and successful value investors to create an extensive database of hedge fund holdings. The 13F filings show the hedge funds’ and successful investors’ positions as of the end of the first quarter. You can find articles about an individual hedge fund’s trades on numerous financial news websites. However, in this article we will take a look at their collective moves over the last 4.5 years and analyze what the smart money thinks of Blueprint Medicines Corporation (NASDAQ:BPMC) based on that data and determine whether they were really smart about the stock.

Is Blueprint Medicines Corporation (NASDAQ:BPMC) ready to rally soon? Hedge funds were getting less bullish. The number of bullish hedge fund bets retreated by 1 in recent months. Our calculations also showed that BPMC isn’t among the 30 most popular stocks among hedge funds (click for Q1 rankings and see the video for a quick look at the top 5 stocks). BPMC was in 36 hedge funds’ portfolios at the end of the first quarter of 2020. There were 37 hedge funds in our database with BPMC holdings at the end of the previous quarter.

To most traders, hedge funds are seen as slow, old financial vehicles of the past. While there are more than 8000 funds trading at the moment, Our researchers hone in on the crème de la crème of this club, about 850 funds. Most estimates calculate that this group of people preside over most of the hedge fund industry’s total asset base, and by following their best investments, Insider Monkey has revealed many investment strategies that have historically surpassed the broader indices. Insider Monkey’s flagship short hedge fund strategy defeated the S&P 500 short ETFs by around 20 percentage points per year since its inception in March 2017. Our portfolio of short stocks lost 36% since February 2017 (through May 18th) even though the market was up 30% during the same period. We just shared a list of 8 short targets in our latest quarterly update .

At Insider Monkey we scour multiple sources to uncover the next great investment idea. We read hedge fund investor letters and listen to stock pitches at hedge fund conferences. Hedge fund sentiment towards Tesla reached its all time high at the end of 2019 and Tesla shares more than tripled this year. We are trying to identify other EV revolution winners, so we are checking out this tiny lithium stock. With all of this in mind we’re going to analyze the new hedge fund action regarding Blueprint Medicines Corporation (NASDAQ:BPMC).

Heading into the second quarter of 2020, a total of 36 of the hedge funds tracked by Insider Monkey were bullish on this stock, a change of -3% from the fourth quarter of 2019. The graph below displays the number of hedge funds with bullish position in BPMC over the last 18 quarters. With hedgies’ positions undergoing their usual ebb and flow, there exists a few notable hedge fund managers who were boosting their stakes considerably (or already accumulated large positions). 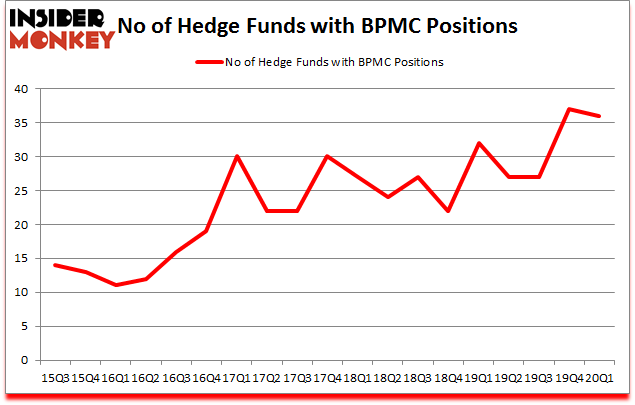 Of the funds tracked by Insider Monkey, Hillhouse Capital Management, managed by Lei Zhang, holds the most valuable position in Blueprint Medicines Corporation (NASDAQ:BPMC). Hillhouse Capital Management has a $94.3 million position in the stock, comprising 1.3% of its 13F portfolio. The second most bullish fund manager is Viking Global, led by Andreas Halvorsen, holding a $93.6 million position; the fund has 0.5% of its 13F portfolio invested in the stock. Other hedge funds and institutional investors that hold long positions encompass Eli Casdin’s Casdin Capital, Arthur B Cohen and Joseph Healey’s Healthcor Management LP and Eric Bannasch’s Cadian Capital. In terms of the portfolio weights assigned to each position Foresite Capital allocated the biggest weight to Blueprint Medicines Corporation (NASDAQ:BPMC), around 15.82% of its 13F portfolio. Casdin Capital is also relatively very bullish on the stock, designating 9.62 percent of its 13F equity portfolio to BPMC.

Judging by the fact that Blueprint Medicines Corporation (NASDAQ:BPMC) has faced declining sentiment from the entirety of the hedge funds we track, we can see that there was a specific group of hedge funds that decided to sell off their positions entirely by the end of the first quarter. Intriguingly, Steve Cohen’s Point72 Asset Management dumped the largest investment of the 750 funds watched by Insider Monkey, totaling an estimated $16.8 million in stock. Mark Lampert’s fund, Biotechnology Value Fund / BVF Inc, also said goodbye to its stock, about $14.7 million worth. These bearish behaviors are intriguing to say the least, as total hedge fund interest was cut by 1 funds by the end of the first quarter.

As you can see these stocks had an average of 20.5 hedge funds with bullish positions and the average amount invested in these stocks was $144 million. That figure was $762 million in BPMC’s case. Western Alliance Bancorporation (NYSE:WAL) is the most popular stock in this table. On the other hand Glacier Bancorp, Inc. (NASDAQ:GBCI) is the least popular one with only 12 bullish hedge fund positions. Compared to these stocks Blueprint Medicines Corporation (NASDAQ:BPMC) is more popular among hedge funds. Our calculations showed that top 10 most popular stocks among hedge funds returned 41.4% in 2019 and outperformed the S&P 500 ETF (SPY) by 10.1 percentage points. These stocks returned 12.3% in 2020 through June 30th but still managed to beat the market by 15.5 percentage points. Hedge funds were also right about betting on BPMC as the stock returned 33.4% in Q2 and outperformed the market by an even larger margin. Hedge funds were clearly right about piling into this stock relative to other stocks with similar market capitalizations.