Concerns over rising interest rates and expected further rate increases have hit several stocks hard during the fourth quarter. Trends reversed 180 degrees during the first quarter amid Powell’s pivot and optimistic expectations towards a trade deal with China. Hedge funds and institutional investors tracked by Insider Monkey usually invest a disproportionate amount of their portfolios in smaller cap stocks. We have been receiving indications that hedge funds were increasing their overall exposure in the first quarter and this is one of the factors behind the recent movements in major indices. In this article, we will take a closer look at hedge fund sentiment towards Silicon Laboratories Inc. (NASDAQ:SLAB).

Is Silicon Laboratories Inc. (NASDAQ:SLAB) a healthy stock for your portfolio? Investors who are in the know are getting less optimistic. The number of bullish hedge fund positions shrunk by 5 recently. Our calculations also showed that SLAB isn’t among the 30 most popular stocks among hedge funds.

To the average investor there are a large number of indicators stock traders employ to evaluate stocks. Two of the best indicators are hedge fund and insider trading sentiment. Our researchers have shown that, historically, those who follow the best picks of the top fund managers can trounce the market by a superb margin (see the details here).

What have hedge funds been doing with Silicon Laboratories Inc. (NASDAQ:SLAB)?

Heading into the second quarter of 2019, a total of 12 of the hedge funds tracked by Insider Monkey were bullish on this stock, a change of -29% from the fourth quarter of 2018. On the other hand, there were a total of 18 hedge funds with a bullish position in SLAB a year ago. With hedge funds’ capital changing hands, there exists a select group of noteworthy hedge fund managers who were adding to their holdings considerably (or already accumulated large positions). 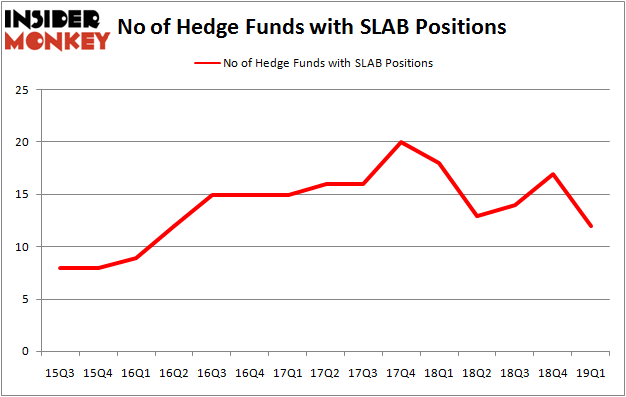 More specifically, Carlson Capital was the largest shareholder of Silicon Laboratories Inc. (NASDAQ:SLAB), with a stake worth $16 million reported as of the end of March. Trailing Carlson Capital was D E Shaw, which amassed a stake valued at $5.8 million. AQR Capital Management, Millennium Management, and PDT Partners were also very fond of the stock, giving the stock large weights in their portfolios.

Because Silicon Laboratories Inc. (NASDAQ:SLAB) has experienced a decline in interest from hedge fund managers, we can see that there lies a certain “tier” of money managers who were dropping their full holdings heading into Q3. At the top of the heap, Glenn Russell Dubin’s Highbridge Capital Management cut the largest stake of the 700 funds followed by Insider Monkey, valued at an estimated $15.9 million in stock. Jim Simons’s fund, Renaissance Technologies, also dropped its stock, about $7 million worth. These bearish behaviors are interesting, as total hedge fund interest fell by 5 funds heading into Q3.

As you can see these stocks had an average of 15 hedge funds with bullish positions and the average amount invested in these stocks was $213 million. That figure was $40 million in SLAB’s case. Telephone & Data Systems, Inc. (NYSE:TDS) is the most popular stock in this table. On the other hand AU Optronics Corp. (NYSE:AUO) is the least popular one with only 8 bullish hedge fund positions. Silicon Laboratories Inc. (NASDAQ:SLAB) is not the least popular stock in this group but hedge fund interest is still below average. Our calculations showed that top 20 most popular stocks among hedge funds returned 6.2% in Q2 through June 19th and outperformed the S&P 500 ETF (SPY) by nearly 3 percentage points. A small number of hedge funds were also right about betting on SLAB as the stock returned 22.9% during the same time frame and outperformed the market by an even larger margin.