Before we spend days researching a stock idea we’d like to take a look at how hedge funds and billionaire investors recently traded that stock. S&P 500 Index ETF (SPY) lost 2.6% in the first two months of the second quarter. Ten out of 11 industry groups in the S&P 500 Index lost value in May. The average return of a randomly picked stock in the index was even worse (-3.6%). This means you (or a monkey throwing a dart) have less than an even chance of beating the market by randomly picking a stock. On the other hand, the top 20 most popular S&P 500 stocks among hedge funds not only generated positive returns but also outperformed the index by about 3 percentage points through May 30th. In this article, we will take a look at what hedge funds think about Scorpio Tankers Inc. (NYSE:STNG).

Scorpio Tankers Inc. (NYSE:STNG) has experienced an increase in activity from the world’s largest hedge funds lately. Our calculations also showed that STNG isn’t among the 30 most popular stocks among hedge funds.

In the eyes of most investors, hedge funds are viewed as unimportant, old investment tools of yesteryear. While there are more than 8000 funds with their doors open today, Our experts hone in on the upper echelon of this group, about 750 funds. These hedge fund managers watch over the majority of the smart money’s total capital, and by monitoring their top picks, Insider Monkey has revealed a number of investment strategies that have historically surpassed the market. Insider Monkey’s flagship hedge fund strategy defeated the S&P 500 index by around 5 percentage points per annum since its inception in May 2014 through the end of May. We were able to generate large returns even by identifying short candidates. Our portfolio of short stocks lost 30.9% since February 2017 (through May 30th) even though the market was up nearly 24% during the same period. We just shared a list of 5 short targets in our latest quarterly update and they are already down an average of 11.9% in less than a couple of weeks whereas our long picks outperformed the market by 2 percentage points in this volatile 2 week period.

What have hedge funds been doing with Scorpio Tankers Inc. (NYSE:STNG)?

At Q1’s end, a total of 18 of the hedge funds tracked by Insider Monkey were long this stock, a change of 80% from the fourth quarter of 2018. Below, you can check out the change in hedge fund sentiment towards STNG over the last 15 quarters. With hedgies’ capital changing hands, there exists a few key hedge fund managers who were adding to their holdings significantly (or already accumulated large positions). 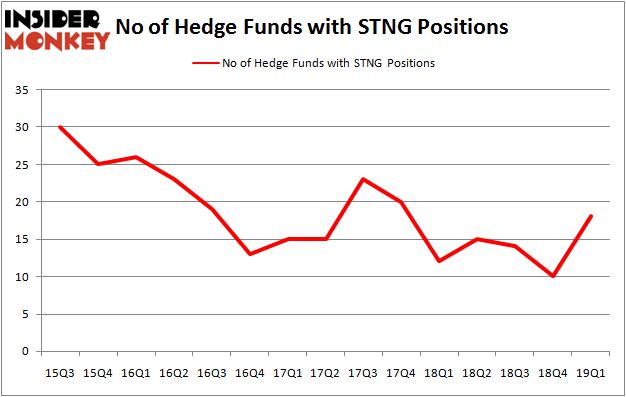 More specifically, 683 Capital Partners was the largest shareholder of Scorpio Tankers Inc. (NYSE:STNG), with a stake worth $29.8 million reported as of the end of March. Trailing 683 Capital Partners was Marshall Wace LLP, which amassed a stake valued at $15.6 million. Monarch Alternative Capital, Carlson Capital, and Point72 Asset Management were also very fond of the stock, giving the stock large weights in their portfolios.

As industrywide interest jumped, some big names were leading the bulls’ herd. Point72 Asset Management, managed by Steve Cohen, initiated the most valuable position in Scorpio Tankers Inc. (NYSE:STNG). Point72 Asset Management had $10 million invested in the company at the end of the quarter. David Rosen’s Rubric Capital Management also made a $9.9 million investment in the stock during the quarter. The other funds with new positions in the stock are Matthew Hulsizer’s PEAK6 Capital Management, Jim Simons’s Renaissance Technologies, and Charles Davidson and Joseph Jacobs’s Wexford Capital.

As you can see these stocks had an average of 15.75 hedge funds with bullish positions and the average amount invested in these stocks was $72 million. That figure was $118 million in STNG’s case. Sangamo Therapeutics, Inc. (NASDAQ:SGMO) is the most popular stock in this table. On the other hand MTS Systems Corporation (NASDAQ:MTSC) is the least popular one with only 10 bullish hedge fund positions. Scorpio Tankers Inc. (NYSE:STNG) is not the most popular stock in this group but hedge fund interest is still above average. Our calculations showed that top 20 most popular stocks among hedge funds returned 1.9% in Q2 through May 30th and outperformed the S&P 500 ETF (SPY) by more than 3 percentage points. Hedge funds were also right about betting on STNG as the stock returned 31.6% during the same period and outperformed the market by an even larger margin. Hedge funds were rewarded for their relative bullishness.