The 700+ hedge funds and famous money managers tracked by Insider Monkey have already compiled and submitted their 13F filings for the third quarter, which unveil their equity positions as of September 30. We went through these filings, fixed typos and other more significant errors and identified the changes in hedge fund portfolios. Our extensive review of these public filings is finally over, so this article is set to reveal the smart money sentiment towards Osmotica Pharmaceuticals plc (NASDAQ:OSMT).

Osmotica Pharmaceuticals plc (NASDAQ:OSMT) has experienced a decrease in enthusiasm from smart money recently. Our calculations also showed that OSMT isn’t among the 30 most popular stocks among hedge funds.

Unlike the largest US hedge funds that are convinced Dow will soar past 40,000 or the world’s most bearish hedge fund that’s more convinced than ever that a crash is coming, our long-short investment strategy doesn’t rely on bull or bear markets to deliver double digit returns. We only rely on the best performing hedge funds‘ buy/sell signals. Let’s view the key hedge fund action surrounding Osmotica Pharmaceuticals plc (NASDAQ:OSMT). 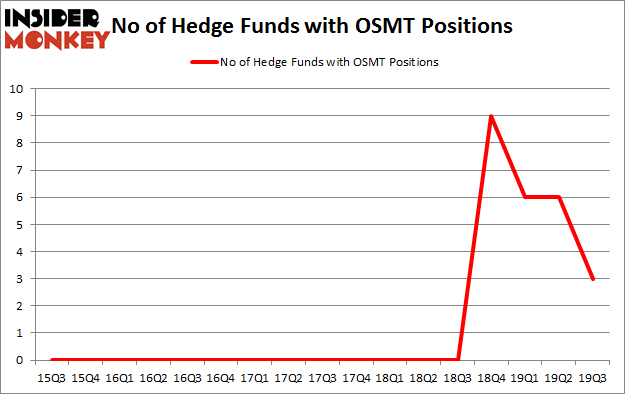 According to Insider Monkey’s hedge fund database, Renaissance Technologies has the number one position in Osmotica Pharmaceuticals plc (NASDAQ:OSMT), worth close to $0.5 million, corresponding to less than 0.1%% of its total 13F portfolio. Sitting at the No. 2 spot is Millennium Management, led by Israel Englander, holding a $0.3 million position; less than 0.1%% of its 13F portfolio is allocated to the company. In terms of the portfolio weights assigned to each position Millennium Management allocated the biggest weight to Osmotica Pharmaceuticals plc (NASDAQ:OSMT), around 0.0004% of its portfolio. Renaissance Technologies is also relatively very bullish on the stock, dishing out 0.0004 percent of its 13F equity portfolio to OSMT.

Seeing as Osmotica Pharmaceuticals plc (NASDAQ:OSMT) has witnessed a decline in interest from the entirety of the hedge funds we track, logic holds that there is a sect of funds who sold off their full holdings in the third quarter. It’s worth mentioning that Jeffrey Jay and David Kroin’s Great Point Partners dropped the biggest investment of the 750 funds tracked by Insider Monkey, comprising about $3.5 million in stock. Vishal Saluja and Pham Quang’s fund, Endurant Capital Management, also sold off its stock, about $2 million worth. These transactions are interesting, as total hedge fund interest was cut by 3 funds in the third quarter.

As you can see these stocks had an average of 10 hedge funds with bullish positions and the average amount invested in these stocks was $20 million. That figure was $1 million in OSMT’s case. Mallinckrodt plc (NYSE:MNK) is the most popular stock in this table. On the other hand Smith Micro Software, Inc. (NASDAQ:SMSI) is the least popular one with only 4 bullish hedge fund positions. Compared to these stocks Osmotica Pharmaceuticals plc (NASDAQ:OSMT) is even less popular than SMSI. Hedge funds clearly dropped the ball on OSMT as the stock delivered strong returns, though hedge funds’ consensus picks still generated respectable returns. Our calculations showed that top 20 most popular stocks among hedge funds returned 34.7% in 2019 through November 22nd and outperformed the S&P 500 ETF (SPY) by 8.5 percentage points. A small number of hedge funds were also right about betting on OSMT as the stock returned 57.8% during the fourth quarter (through 11/22) and outperformed the market by an even larger margin.