The latest 13F reporting period has come and gone, and Insider Monkey is again at the forefront when it comes to making use of this gold mine of data. We have processed the filings of the more than 700 world-class investment firms that we track and now have access to the collective wisdom contained in these filings, which are based on their March 31 holdings, data that is available nowhere else. Should you consider NovaGold Resources Inc. (NYSEAMEX:NG) for your portfolio? We’ll look to this invaluable collective wisdom for the answer.

Is NovaGold Resources Inc. (NYSEAMEX:NG) a buy right now? Prominent investors are turning less bullish. The number of long hedge fund positions fell by 6 lately. Our calculations also showed that NG isn’t among the 30 most popular stocks among hedge funds.

How have hedgies been trading NovaGold Resources Inc. (NYSEAMEX:NG)?

At Q1’s end, a total of 13 of the hedge funds tracked by Insider Monkey held long positions in this stock, a change of -32% from the fourth quarter of 2018. On the other hand, there were a total of 14 hedge funds with a bullish position in NG a year ago. With hedgies’ capital changing hands, there exists an “upper tier” of notable hedge fund managers who were adding to their stakes meaningfully (or already accumulated large positions). 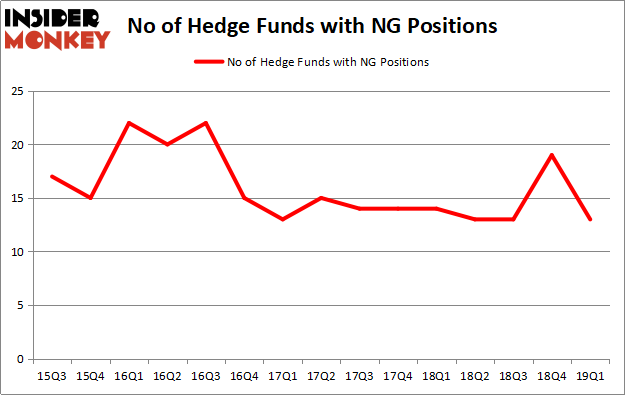 Among these funds, Paulson & Co held the most valuable stake in NovaGold Resources Inc. (NYSEAMEX:NG), which was worth $91.7 million at the end of the first quarter. On the second spot was Empyrean Capital Partners which amassed $21.7 million worth of shares. Moreover, Moore Global Investments, Kopernik Global Investors, and Levin Capital Strategies were also bullish on NovaGold Resources Inc. (NYSEAMEX:NG), allocating a large percentage of their portfolios to this stock.

Seeing as NovaGold Resources Inc. (NYSEAMEX:NG) has witnessed declining sentiment from the entirety of the hedge funds we track, it’s easy to see that there exists a select few hedge funds that decided to sell off their full holdings last quarter. It’s worth mentioning that Marc Lisker, Glenn Fuhrman and John Phelan’s MSDC Management dropped the largest investment of all the hedgies watched by Insider Monkey, totaling about $16.7 million in stock. Peter Rathjens, Bruce Clarke and John Campbell’s fund, Arrowstreet Capital, also cut its stock, about $5.3 million worth. These transactions are intriguing to say the least, as total hedge fund interest fell by 6 funds last quarter.

Let’s now take a look at hedge fund activity in other stocks – not necessarily in the same industry as NovaGold Resources Inc. (NYSEAMEX:NG) but similarly valued. We will take a look at Asbury Automotive Group, Inc. (NYSE:ABG), Seacoast Banking Corporation of Florida (NASDAQ:SBCF), McDermott International, Inc. (NYSE:MDR), and Weight Watchers International, Inc. (NASDAQ:WW). All of these stocks’ market caps are similar to NG’s market cap.

As you can see these stocks had an average of 16.25 hedge funds with bullish positions and the average amount invested in these stocks was $154 million. That figure was $168 million in NG’s case. McDermott International, Inc. (NYSE:MDR) is the most popular stock in this table. On the other hand Seacoast Banking Corporation of Florida (NASDAQ:SBCF) is the least popular one with only 8 bullish hedge fund positions. NovaGold Resources Inc. (NYSEAMEX:NG) is not the least popular stock in this group but hedge fund interest is still below average. Our calculations showed that top 20 most popular stocks among hedge funds returned 6.2% in Q2 through June 19th and outperformed the S&P 500 ETF (SPY) by nearly 3 percentage points. A small number of hedge funds were also right about betting on NG as the stock returned 18.5% during the same time frame and outperformed the market by an even larger margin.