Did Hedge Funds Drop The Ball On NeoGenomics, Inc. (NEO) ?

We know that hedge funds generate strong, risk-adjusted returns over the long run, therefore imitating the picks that they are collectively bullish on can be a profitable strategy for retail investors. With billions of dollars in assets, smart money investors have to conduct complex analyses, spend many resources and use tools that are not always available for the general crowd. This doesn’t mean that they don’t have occasional colossal losses; they do (like Peltz’s recent General Electric losses). However, it is still a good idea to keep an eye on hedge fund activity. With this in mind, as the current round of 13F filings has just ended, let’s examine the smart money sentiment towards NeoGenomics, Inc. (NASDAQ:NEO).

NeoGenomics, Inc. (NASDAQ:NEO) has seen a decrease in support from the world’s most elite money managers of late. NEO was in 15 hedge funds’ portfolios at the end of March. There were 24 hedge funds in our database with NEO holdings at the end of the previous quarter. Our calculations also showed that neo isn’t among the 30 most popular stocks among hedge funds.

At the moment there are a multitude of formulas shareholders employ to analyze stocks. A couple of the most under-the-radar formulas are hedge fund and insider trading moves. We have shown that, historically, those who follow the best picks of the elite fund managers can outperform the broader indices by a very impressive margin (see the details here).

What does smart money think about NeoGenomics, Inc. (NASDAQ:NEO)?

At Q1’s end, a total of 15 of the hedge funds tracked by Insider Monkey were long this stock, a change of -38% from the fourth quarter of 2018. The graph below displays the number of hedge funds with bullish position in NEO over the last 15 quarters. With the smart money’s capital changing hands, there exists a select group of key hedge fund managers who were boosting their stakes considerably (or already accumulated large positions). 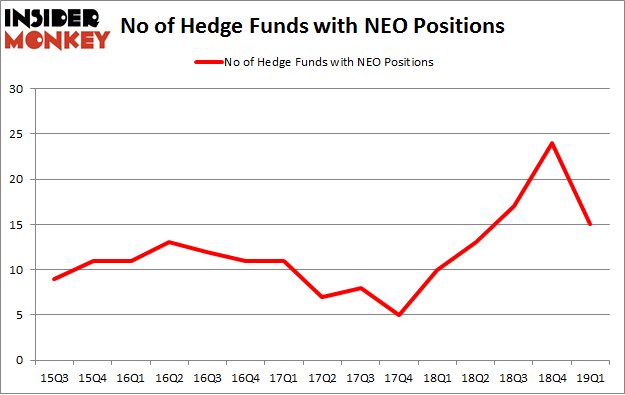 Among these funds, Driehaus Capital held the most valuable stake in NeoGenomics, Inc. (NASDAQ:NEO), which was worth $15.3 million at the end of the first quarter. On the second spot was Royce & Associates which amassed $10 million worth of shares. Moreover, Element Capital Management, Marshall Wace LLP, and AQR Capital Management were also bullish on NeoGenomics, Inc. (NASDAQ:NEO), allocating a large percentage of their portfolios to this stock.

Due to the fact that NeoGenomics, Inc. (NASDAQ:NEO) has witnessed falling interest from the entirety of the hedge funds we track, logic holds that there were a few funds that slashed their positions entirely in the third quarter. Interestingly, Benjamin A. Smith’s Laurion Capital Management dropped the biggest investment of the 700 funds monitored by Insider Monkey, valued at about $15.9 million in stock, and Israel Englander’s Millennium Management was right behind this move, as the fund cut about $9.7 million worth. These bearish behaviors are intriguing to say the least, as aggregate hedge fund interest fell by 9 funds in the third quarter.

As you can see these stocks had an average of 21.75 hedge funds with bullish positions and the average amount invested in these stocks was $256 million. That figure was $51 million in NEO’s case. Comfort Systems USA, Inc. (NYSE:FIX) is the most popular stock in this table. On the other hand Madrigal Pharmaceuticals, Inc. (NASDAQ:MDGL) is the least popular one with only 19 bullish hedge fund positions. Compared to these stocks NeoGenomics, Inc. (NASDAQ:NEO) is even less popular than MDGL. Hedge funds clearly dropped the ball on NEO as the stock delivered strong returns, though hedge funds’ consensus picks still generated respectable returns. Our calculations showed that top 20 most popular stocks among hedge funds returned 6.2% in Q2 through June 19th and outperformed the S&P 500 ETF (SPY) by nearly 3 percentage points. A small number of hedge funds were also right about betting on NEO as the stock returned 17.1% during the same period and outperformed the market by an even larger margin.