Did Hedge Funds Drop The Ball On LendingTree, Inc (TREE) ?

Concerns over rising interest rates and expected further rate increases have hit several stocks hard during the fourth quarter. Trends reversed 180 degrees during the first quarter amid Powell’s pivot and optimistic expectations towards a trade deal with China. Hedge funds and institutional investors tracked by Insider Monkey usually invest a disproportionate amount of their portfolios in smaller cap stocks. We have been receiving indications that hedge funds were increasing their overall exposure in the first quarter and this is one of the factors behind the recent movements in major indices. In this article, we will take a closer look at hedge fund sentiment towards LendingTree, Inc (NASDAQ:TREE).

Is LendingTree, Inc (NASDAQ:TREE) going to take off soon? The best stock pickers are taking a pessimistic view. The number of bullish hedge fund positions were trimmed by 4 recently. Our calculations also showed that TREE isn’t among the 30 most popular stocks among hedge funds.

If you’d ask most stock holders, hedge funds are perceived as worthless, outdated investment vehicles of yesteryear. While there are more than 8000 funds in operation at the moment, Our experts choose to focus on the masters of this group, around 750 funds. It is estimated that this group of investors preside over the lion’s share of the smart money’s total capital, and by shadowing their highest performing equity investments, Insider Monkey has spotted various investment strategies that have historically surpassed Mr. Market. Insider Monkey’s flagship hedge fund strategy outstripped the S&P 500 index by around 5 percentage points annually since its inception in May 2014 through June 18th. We were able to generate large returns even by identifying short candidates. Our portfolio of short stocks lost 28.2% since February 2017 (through June 18th) even though the market was up nearly 30% during the same period. We just shared a list of 5 short targets in our latest quarterly update and they are already down an average of 8.2% in a month whereas our long picks outperformed the market by 2.5 percentage points in this volatile 5 week period (our long picks also beat the market by 15 percentage points so far this year).

What does smart money think about LendingTree, Inc (NASDAQ:TREE)? 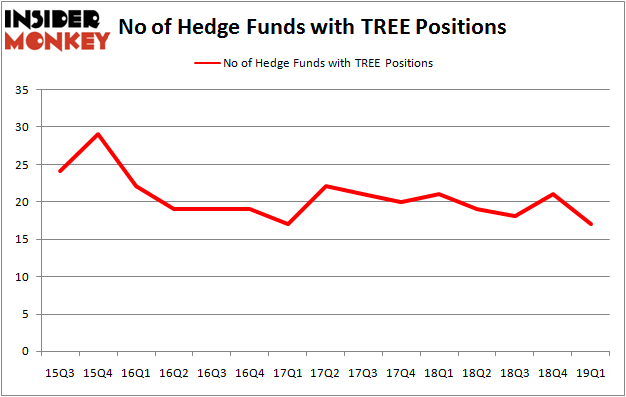 Seeing as LendingTree, Inc (NASDAQ:TREE) has witnessed bearish sentiment from the smart money, it’s safe to say that there is a sect of hedge funds who were dropping their full holdings in the third quarter. Intriguingly, John Overdeck and David Siegel’s Two Sigma Advisors cut the biggest investment of the “upper crust” of funds watched by Insider Monkey, comprising an estimated $1.6 million in stock. Israel Englander’s fund, Millennium Management, also cut its stock, about $1.3 million worth. These transactions are important to note, as total hedge fund interest was cut by 4 funds in the third quarter.

As you can see these stocks had an average of 16.75 hedge funds with bullish positions and the average amount invested in these stocks was $262 million. That figure was $83 million in TREE’s case. Kirby Corporation (NYSE:KEX) is the most popular stock in this table. On the other hand Littelfuse, Inc. (NASDAQ:LFUS) is the least popular one with only 13 bullish hedge fund positions. LendingTree, Inc (NASDAQ:TREE) is not the most popular stock in this group but hedge fund interest is still above average. Our calculations showed that top 20 most popular stocks among hedge funds returned 6.2% in Q2 through June 19th and outperformed the S&P 500 ETF (SPY) by nearly 3 percentage points. Hedge funds were also right about betting on TREE as the stock returned 17.8% during the same period and outperformed the market by an even larger margin. Hedge funds were rewarded for their relative bullishness.