Hedge fund managers like David Einhorn, Bill Ackman, or Carl Icahn became billionaires through reaping large profits for their investors, which is why piggybacking their stock picks may provide us with significant returns as well. Many hedge funds, like Paul Singer’s Elliott Management, are pretty secretive, but we can still get some insights by analyzing their quarterly 13F filings. One of the most fertile grounds for large abnormal returns is hedge funds’ most popular small-cap picks, which are not so widely followed and often trade at a discount to their intrinsic value. In this article we will check out hedge fund activity in another small-cap stock: Ford Motor Company (NYSE:F).

Hedge fund interest in Ford Motor Company (NYSE:F) shares was flat at the end of last quarter. This is usually a negative indicator. At the end of this article we will also compare F to other stocks including V.F. Corporation (NYSE:VFC), SYSCO Corporation (NYSE:SYY), and Barclays PLC (NYSE:BCS) to get a better sense of its popularity.

How have hedgies been trading Ford Motor Company (NYSE:F)? 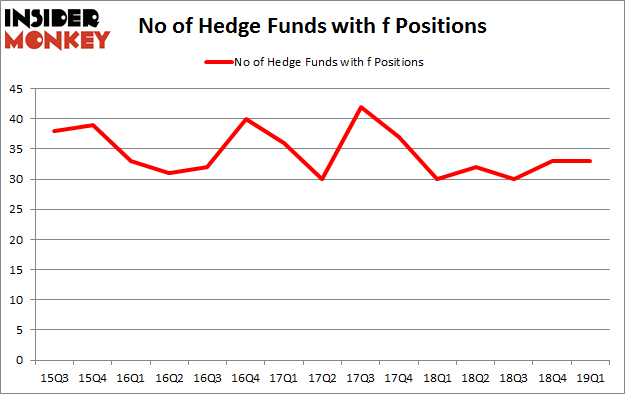 Of the funds tracked by Insider Monkey, Richard S. Pzena’s Pzena Investment Management has the number one position in Ford Motor Company (NYSE:F), worth close to $342.6 million, corresponding to 1.9% of its total 13F portfolio. Sitting at the No. 2 spot is Greenhaven Associates, led by Edgar Wachenheim, holding a $284.8 million position; the fund has 5.1% of its 13F portfolio invested in the stock. Remaining professional money managers with similar optimism contain Peter Rathjens, Bruce Clarke and John Campbell’s Arrowstreet Capital, Jim Simons’s Renaissance Technologies and Ken Griffin’s Citadel Investment Group.

Judging by the fact that Ford Motor Company (NYSE:F) has experienced declining sentiment from hedge fund managers, we can see that there was a specific group of hedge funds that elected to cut their entire stakes in the third quarter. Interestingly, Noam Gottesman’s GLG Partners sold off the biggest investment of the “upper crust” of funds watched by Insider Monkey, worth about $5.3 million in stock, and Ray Dalio’s Bridgewater Associates was right behind this move, as the fund cut about $2.9 million worth. These transactions are important to note, as total hedge fund interest stayed the same (this is a bearish signal in our experience).

As you can see these stocks had an average of 33 hedge funds with bullish positions and the average amount invested in these stocks was $1973 million. That figure was $1106 million in F’s case. Autodesk, Inc. (NASDAQ:ADSK) is the most popular stock in this table. On the other hand Barclays PLC (NYSE:BCS) is the least popular one with only 10 bullish hedge fund positions. Ford Motor Company (NYSE:F) is not the least popular stock in this group but hedge fund interest is still below average. Our calculations showed that top 20 most popular stocks among hedge funds returned 1.9% in Q2 through May 30th and outperformed the S&P 500 ETF (SPY) by more than 3 percentage points. A small number of hedge funds were also right about betting on F as the stock returned 12.7% during the same time frame and outperformed the market by an even larger margin.