We at Insider Monkey have gone over 738 13F filings that hedge funds and prominent investors are required to file by the SEC The 13F filings show the funds’ and investors’ portfolio positions as of March 31st. In this article, we look at what those funds think of FactSet Research Systems Inc. (NYSE:FDS) based on that data.

Is FactSet Research Systems Inc. (NYSE:FDS) going to take off soon? Prominent investors are taking a bearish view. The number of long hedge fund positions shrunk by 2 lately. Our calculations also showed that fds isn’t among the 30 most popular stocks among hedge funds. FDS was in 18 hedge funds’ portfolios at the end of March. There were 20 hedge funds in our database with FDS positions at the end of the previous quarter. 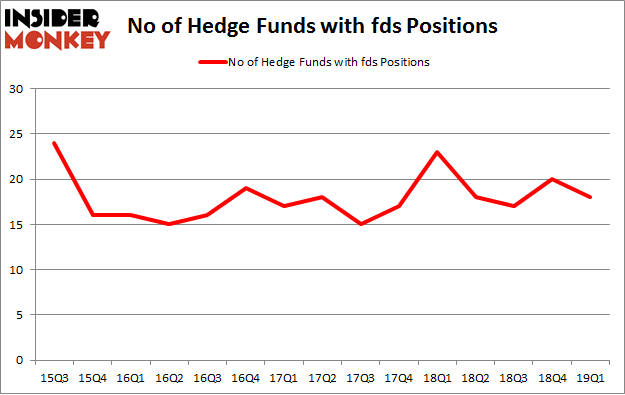 More specifically, Renaissance Technologies was the largest shareholder of FactSet Research Systems Inc. (NYSE:FDS), with a stake worth $146.9 million reported as of the end of March. Trailing Renaissance Technologies was Markel Gayner Asset Management, which amassed a stake valued at $28.8 million. Echo Street Capital Management, Millennium Management, and GLG Partners were also very fond of the stock, giving the stock large weights in their portfolios.

Since FactSet Research Systems Inc. (NYSE:FDS) has witnessed declining sentiment from the aggregate hedge fund industry, it’s safe to say that there is a sect of fund managers who sold off their full holdings by the end of the third quarter. Intriguingly, Peter Seuss’s Prana Capital Management sold off the biggest position of all the hedgies tracked by Insider Monkey, valued at about $11.4 million in stock. John Overdeck and David Siegel’s fund, Two Sigma Advisors, also cut its stock, about $7.4 million worth. These moves are intriguing to say the least, as total hedge fund interest dropped by 2 funds by the end of the third quarter.

As you can see these stocks had an average of 36 hedge funds with bullish positions and the average amount invested in these stocks was $1368 million. That figure was $251 million in FDS’s case. PG&E Corporation (NYSE:PCG) is the most popular stock in this table. On the other hand Erie Indemnity Company (NASDAQ:ERIE) is the least popular one with only 17 bullish hedge fund positions. FactSet Research Systems Inc. (NYSE:FDS) is not the least popular stock in this group but hedge fund interest is still below average. Our calculations showed that top 20 most popular stocks among hedge funds returned 1.9% in Q2 through May 30th and outperformed the S&P 500 ETF (SPY) by more than 3 percentage points. A small number of hedge funds were also right about betting on FDS as the stock returned 12.4% during the same time frame and outperformed the market by an even larger margin.