Echostar Corporation (NASDAQ:SATS) has seen a decrease in support from the world’s most elite money managers in recent months. Our calculations also showed that sats isn’t among the 30 most popular stocks among hedge funds.

We’re going to take a look at the recent hedge fund action regarding Echostar Corporation (NASDAQ:SATS).

Heading into the second quarter of 2019, a total of 29 of the hedge funds tracked by Insider Monkey were bullish on this stock, a change of -15% from one quarter earlier. The graph below displays the number of hedge funds with bullish position in SATS over the last 15 quarters. So, let’s check out which hedge funds were among the top holders of the stock and which hedge funds were making big moves. 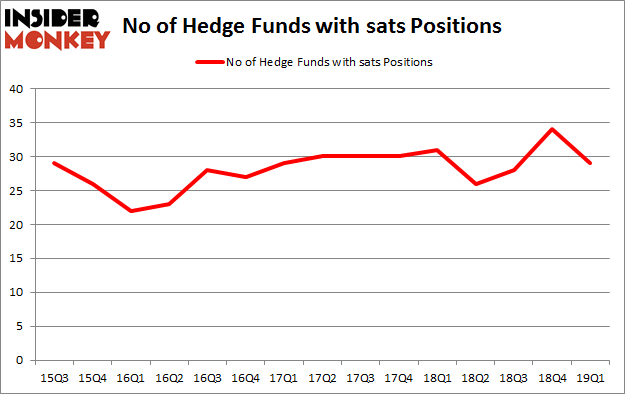 More specifically, Renaissance Technologies was the largest shareholder of Echostar Corporation (NASDAQ:SATS), with a stake worth $119.6 million reported as of the end of March. Trailing Renaissance Technologies was Mangrove Partners, which amassed a stake valued at $55.9 million. Park West Asset Management, Indaba Capital Management, and Arrowstreet Capital were also very fond of the stock, giving the stock large weights in their portfolios.

Because Echostar Corporation (NASDAQ:SATS) has experienced a decline in interest from the entirety of the hedge funds we track, it’s easy to see that there exists a select few funds that decided to sell off their entire stakes last quarter. It’s worth mentioning that Frederick DiSanto’s Ancora Advisors dumped the largest stake of all the hedgies tracked by Insider Monkey, worth an estimated $9.2 million in stock, and Michael Lowenstein’s Kensico Capital was right behind this move, as the fund sold off about $9.2 million worth. These bearish behaviors are intriguing to say the least, as aggregate hedge fund interest fell by 5 funds last quarter.

As you can see these stocks had an average of 16.75 hedge funds with bullish positions and the average amount invested in these stocks was $148 million. That figure was $410 million in SATS’s case. F.N.B. Corp (NYSE:FNB) is the most popular stock in this table. On the other hand Sabra Health Care REIT Inc (NASDAQ:SBRA) is the least popular one with only 9 bullish hedge fund positions. Compared to these stocks Echostar Corporation (NASDAQ:SATS) is more popular among hedge funds. Our calculations showed that top 20 most popular stocks among hedge funds returned 1.9% in Q2 through May 30th and outperformed the S&P 500 ETF (SPY) by more than 3 percentage points. Hedge funds were also right about betting on SATS as the stock returned 17.4% during the same period and outperformed the market by an even larger margin. Hedge funds were clearly right about piling into this stock relative to other stocks with similar market capitalizations.