Is DHI Group Inc. (NYSE:DHX) an outstanding investment right now? The best stock pickers are becoming hopeful. The number of bullish hedge fund bets increased by 1 lately. Our calculations also showed that dhx isn’t among the 30 most popular stocks among hedge funds. DHX was in 13 hedge funds’ portfolios at the end of March. There were 12 hedge funds in our database with DHX positions at the end of the previous quarter.

In the eyes of most shareholders, hedge funds are assumed to be slow, old financial tools of years past. While there are greater than 8000 funds trading at the moment, Our researchers choose to focus on the crème de la crème of this club, about 750 funds. It is estimated that this group of investors control the majority of all hedge funds’ total capital, and by keeping track of their best picks, Insider Monkey has identified several investment strategies that have historically outrun Mr. Market. Insider Monkey’s flagship hedge fund strategy surpassed the S&P 500 index by around 5 percentage points annually since its inception in May 2014 through June 18th. We were able to generate large returns even by identifying short candidates. Our portfolio of short stocks lost 28.2% since February 2017 (through June 18th) even though the market was up nearly 30% during the same period. We just shared a list of 5 short targets in our latest quarterly update and they are already down an average of 8.2% in a month whereas our long picks outperformed the market by 2.5 percentage points in this volatile 5 week period (our long picks also beat the market by 15 percentage points so far this year).

At the end of the first quarter, a total of 13 of the hedge funds tracked by Insider Monkey were bullish on this stock, a change of 8% from the previous quarter. By comparison, 11 hedge funds held shares or bullish call options in DHX a year ago. With hedgies’ positions undergoing their usual ebb and flow, there exists a few noteworthy hedge fund managers who were upping their holdings substantially (or already accumulated large positions). 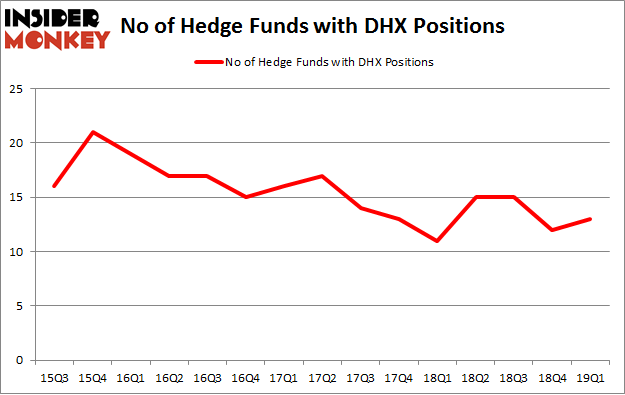 Now, key hedge funds have jumped into DHI Group Inc. (NYSE:DHX) headfirst. ExodusPoint Capital, managed by Michael Gelband, established the most outsized position in DHI Group Inc. (NYSE:DHX). ExodusPoint Capital had $0.1 million invested in the company at the end of the quarter. Michael Platt and William Reeves’s BlueCrest Capital Mgmt. also initiated a $0.1 million position during the quarter. The only other fund with a brand new DHX position is Matthew Hulsizer’s PEAK6 Capital Management.

As you can see these stocks had an average of 7 hedge funds with bullish positions and the average amount invested in these stocks was $16 million. That figure was $33 million in DHX’s case. Recro Pharma Inc (NASDAQ:REPH) is the most popular stock in this table. On the other hand CB Financial Services, Inc. (NASDAQ:CBFV) is the least popular one with only 2 bullish hedge fund positions. Compared to these stocks DHI Group Inc. (NYSE:DHX) is more popular among hedge funds. Our calculations showed that top 20 most popular stocks among hedge funds returned 6.2% in Q2 through June 19th and outperformed the S&P 500 ETF (SPY) by nearly 3 percentage points. Hedge funds were also right about betting on DHX as the stock returned 72.8% during the same period and outperformed the market by an even larger margin. Hedge funds were clearly right about piling into this stock relative to other stocks with similar market capitalizations.