Did Hedge Funds Drop The Ball On Capital One Financial Corp. (COF)?

Insider Monkey finished processing more than 738 13F filings submitted by hedge funds and prominent investors. These filings show these funds’ portfolio positions as of March 31st, 2019. In this article we are going to take a look at smart money sentiment towards Capital One Financial Corp. (NYSE:COF).

Capital One Financial Corp. (NYSE:COF) shares haven’t seen a lot of action during the first quarter. Overall, hedge fund sentiment was unchanged. The stock was in 44 hedge funds’ portfolios at the end of the first quarter of 2019. At the end of this article we will also compare COF to other stocks including Banco Bilbao Vizcaya Argentaria SA (NYSE:BBVA), National Grid plc (NYSE:NGG), and Equinix Inc (NASDAQ:EQIX) to get a better sense of its popularity.

Let’s take a look at the new hedge fund action regarding Capital One Financial Corp. (NYSE:COF).

How are hedge funds trading Capital One Financial Corp. (NYSE:COF)?

At Q1’s end, a total of 44 of the hedge funds tracked by Insider Monkey were bullish on this stock, a change of 0% from the previous quarter. The graph below displays the number of hedge funds with bullish position in COF over the last 15 quarters. With hedgies’ capital changing hands, there exists a few notable hedge fund managers who were adding to their holdings meaningfully (or already accumulated large positions). 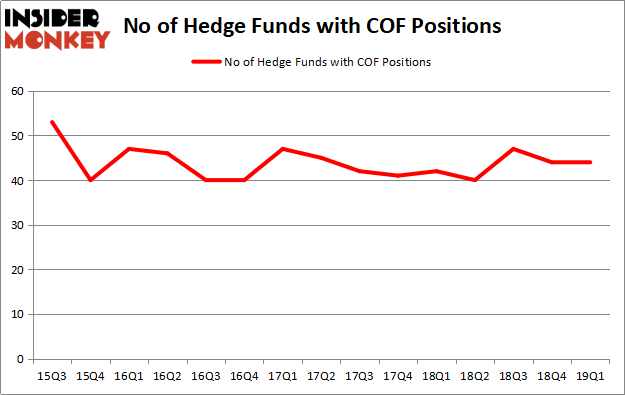 The largest stake in Capital One Financial Corp. (NYSE:COF) was held by Pzena Investment Management, which reported holding $461.8 million worth of stock at the end of March. It was followed by Point72 Asset Management with a $219.5 million position. Other investors bullish on the company included Millennium Management, D E Shaw, and Fisher Asset Management.

Since Capital One Financial Corp. (NYSE:COF) has experienced bearish sentiment from the entirety of the hedge funds we track, it’s easy to see that there were a few hedgies who were dropping their entire stakes in the third quarter. Interestingly, David Costen Haley’s HBK Investments said goodbye to the largest stake of all the hedgies watched by Insider Monkey, totaling about $24 million in stock, and Principal Global Investors’s Columbus Circle Investors was right behind this move, as the fund sold off about $23.6 million worth. These transactions are important to note, as aggregate hedge fund interest stayed the same (this is a bearish signal in our experience).

As you can see these stocks had an average of 18.75 hedge funds with bullish positions and the average amount invested in these stocks was $825 million. That figure was $1694 million in COF’s case. Equinix Inc (NASDAQ:EQIX) is the most popular stock in this table. On the other hand Banco Bilbao Vizcaya Argentaria SA (NYSE:BBVA) is the least popular one with only 4 bullish hedge fund positions. Compared to these stocks Capital One Financial Corp. (NYSE:COF) is more popular among hedge funds. Our calculations showed that top 20 most popular stocks among hedge funds returned 1.9% in Q2 through May 30th and outperformed the S&P 500 ETF (SPY) by more than 3 percentage points. Hedge funds were also right about betting on COF as the stock returned 8.6% during the same period and outperformed the market by an even larger margin. Hedge funds were clearly right about piling into this stock relative to other stocks with similar market capitalizations.