Did Hedge Funds Drop The Ball On BRF S.A. (BRFS) ?

BRF S.A. (NYSE:BRFS) investors should be aware of an increase in hedge fund sentiment of late. BRFS was in 10 hedge funds’ portfolios at the end of the first quarter of 2019. There were 9 hedge funds in our database with BRFS holdings at the end of the previous quarter. Our calculations also showed that brfs isn’t among the 30 most popular stocks among hedge funds.

We’re going to take a glance at the recent hedge fund action regarding BRF S.A. (NYSE:BRFS).

How have hedgies been trading BRF S.A. (NYSE:BRFS)? 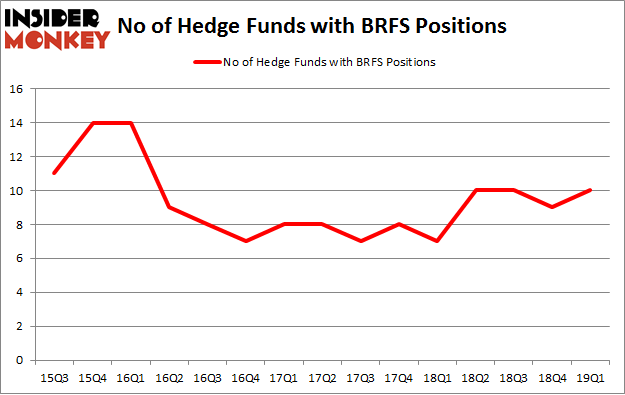 Among these funds, Oaktree Capital Management held the most valuable stake in BRF S.A. (NYSE:BRFS), which was worth $34.8 million at the end of the first quarter. On the second spot was QVT Financial which amassed $8.2 million worth of shares. Moreover, Point72 Asset Management, HBK Investments, and Millennium Management were also bullish on BRF S.A. (NYSE:BRFS), allocating a large percentage of their portfolios to this stock.

As aggregate interest increased, key hedge funds have jumped into BRF S.A. (NYSE:BRFS) headfirst. Point72 Asset Management, managed by Steve Cohen, established the most valuable position in BRF S.A. (NYSE:BRFS). Point72 Asset Management had $4.3 million invested in the company at the end of the quarter. Israel Englander’s Millennium Management also initiated a $1.3 million position during the quarter. The only other fund with a brand new BRFS position is Cliff Asness’s AQR Capital Management.

As you can see these stocks had an average of 19.25 hedge funds with bullish positions and the average amount invested in these stocks was $224 million. That figure was $54 million in BRFS’s case. Paylocity Holding Corp (NASDAQ:PCTY) is the most popular stock in this table. On the other hand Avnet, Inc. (NASDAQ:AVT) is the least popular one with only 17 bullish hedge fund positions. Compared to these stocks BRF S.A. (NYSE:BRFS) is even less popular than AVT. Hedge funds clearly dropped the ball on BRFS as the stock delivered strong returns, though hedge funds’ consensus picks still generated respectable returns. Our calculations showed that top 20 most popular stocks among hedge funds returned 6.2% in Q2 through June 19th and outperformed the S&P 500 ETF (SPY) by nearly 3 percentage points. A small number of hedge funds were also right about betting on BRFS as the stock returned 25.8% during the same period and outperformed the market by an even larger margin.