Did Hedge Funds Drop The Ball On Aramark (ARMK) ?

Is Aramark (NYSE:ARMK) a healthy stock for your portfolio? Prominent investors are getting less optimistic. The number of bullish hedge fund positions decreased by 1 recently. Our calculations also showed that ARMK isn’t among the 30 most popular stocks among hedge funds.

We’re going to take a glance at the fresh hedge fund action regarding Aramark (NYSE:ARMK).

At Q1’s end, a total of 38 of the hedge funds tracked by Insider Monkey held long positions in this stock, a change of -3% from the previous quarter. On the other hand, there were a total of 23 hedge funds with a bullish position in ARMK a year ago. With the smart money’s sentiment swirling, there exists a select group of key hedge fund managers who were increasing their holdings considerably (or already accumulated large positions). 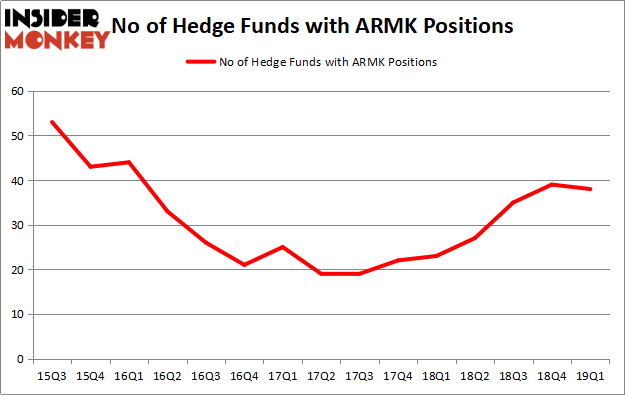 Seeing as Aramark (NYSE:ARMK) has witnessed a decline in interest from the aggregate hedge fund industry, it’s safe to say that there is a sect of hedge funds that slashed their full holdings last quarter. At the top of the heap, Larry Robbins’s Glenview Capital cut the largest position of the 700 funds watched by Insider Monkey, comprising about $87.6 million in call options, and Steve Cohen’s Point72 Asset Management was right behind this move, as the fund said goodbye to about $47.8 million worth. These moves are intriguing to say the least, as aggregate hedge fund interest was cut by 1 funds last quarter.

As you can see these stocks had an average of 19 hedge funds with bullish positions and the average amount invested in these stocks was $508 million. That figure was $854 million in ARMK’s case. Aspen Technology, Inc. (NASDAQ:AZPN) is the most popular stock in this table. On the other hand Enel Chile S.A. (NYSE:ENIC) is the least popular one with only 5 bullish hedge fund positions. Compared to these stocks Aramark (NYSE:ARMK) is more popular among hedge funds. Our calculations showed that top 20 most popular stocks among hedge funds returned 1.9% in Q2 through May 30th and outperformed the S&P 500 ETF (SPY) by more than 3 percentage points. Hedge funds were also right about betting on ARMK as the stock returned 18.5% during the same period and outperformed the market by an even larger margin. Hedge funds were clearly right about piling into this stock relative to other stocks with similar market capitalizations.