Is Ally Financial Inc (NYSE:ALLY) a good investment right now? We check hedge fund and billionaire investor sentiment before delving into hours of research. Hedge funds spend millions of dollars on Ivy League graduates, expert networks, and get tips from investment bankers and industry insiders. Sure they sometimes fail miserably, but their consensus stock picks historically outperformed the market after adjusting for known risk factors.

Is Ally Financial Inc (NYSE:ALLY) the right pick for your portfolio? The best stock pickers are turning less bullish. The number of bullish hedge fund bets shrunk by 1 lately. Our calculations also showed that ALLY isn’t among the 30 most popular stocks among hedge funds. ALLY was in 35 hedge funds’ portfolios at the end of the first quarter of 2019. There were 36 hedge funds in our database with ALLY holdings at the end of the previous quarter. 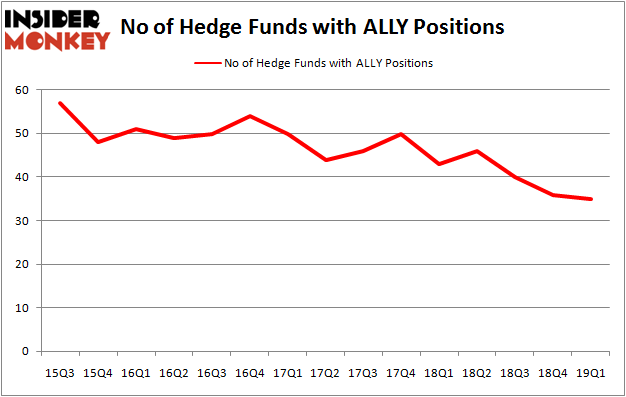 Since Ally Financial Inc (NYSE:ALLY) has faced a decline in interest from the aggregate hedge fund industry, it’s easy to see that there is a sect of hedge funds who were dropping their full holdings last quarter. Interestingly, Joshua Friedman and Mitchell Julis’s Canyon Capital Advisors dropped the biggest investment of all the hedgies followed by Insider Monkey, totaling about $108.8 million in stock, and Jeffrey Tannenbaum’s Fir Tree was right behind this move, as the fund said goodbye to about $9 million worth. These transactions are interesting, as aggregate hedge fund interest was cut by 1 funds last quarter.

As you can see these stocks had an average of 32 hedge funds with bullish positions and the average amount invested in these stocks was $1044 million. That figure was $2048 million in ALLY’s case. Tableau Software Inc (NYSE:DATA) is the most popular stock in this table. On the other hand Duke Realty Corporation (NYSE:DRE) is the least popular one with only 16 bullish hedge fund positions. Ally Financial Inc (NYSE:ALLY) is not the most popular stock in this group but hedge fund interest is still above average. Our calculations showed that top 20 most popular stocks among hedge funds returned 1.9% in Q2 through May 30th and outperformed the S&P 500 ETF (SPY) by more than 3 percentage points. Hedge funds were also right about betting on ALLY as the stock returned 6.8% during the same period and outperformed the market by an even larger margin. Hedge funds were rewarded for their relative bullishness.