Investors love stocks that consistently beat the Street without getting ahead of their fundamentals and risking a meltdown. The best stocks offer sustainable market-beating gains, with robust and improving financial metrics that support strong price growth. Does TRW Automotive Holdings Corp. (NYSE:TRW) fit the bill? Let’s take a look at what its recent results tell us about its potential for future gains.

The graphs you’re about to see tell TRW Automotive Holdings Corp. (NYSE:TRW)’s story, and we’ll be grading the quality of that story in several ways: 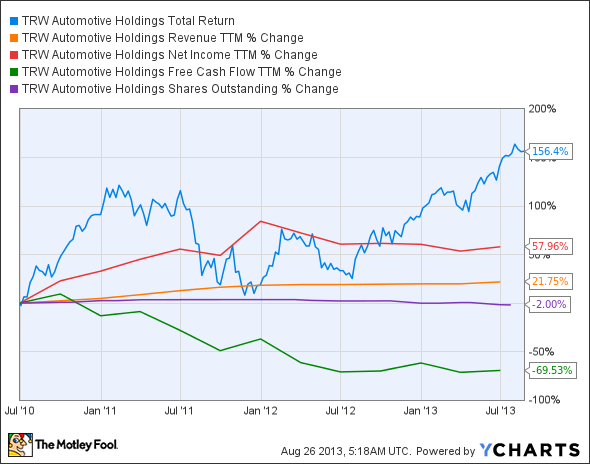 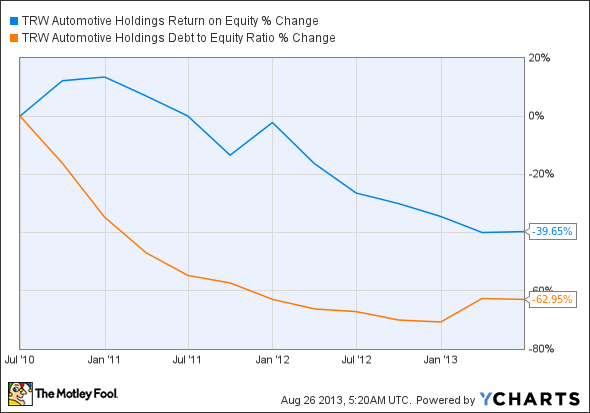 TRW Automotive Holdings Corp. (NYSE:TRW) earns three out of seven passing grades today, having endured some rather divergent fundamentals over the past three years. Net income is up, but free cash flow is down. Shares have soared far beyond the growth of TRW’s bottom line, yet return on equity has weakened. Is the company’s share-price rebound sustainable? Can the fundamentals catch up to investor optimism? Let’s dig a little deeper.

TRW Automotive Holdings Corp. (NYSE:TRW)’s management stated that the increasing demand and vehicle production across North America and China has significantly contributed to the company’s growth. However, the ongoing economic turmoil in Europe has impeded its overall sales growth, since TRW has 42% of its sales exposure in European automobile markets.

Fool contributor Eric Volkman notes that TRW’s management is planning to shake up its existing shareholder roster. Automotive Investors — an affiliate of the Blackstone Group — and a few members of TRW’s management are offering approximately 10.9 million shares through a secondary issue, which might suppress share prices for the near future, at least.

TRW and Delphi Automotive PLC (NYSE:DLPH) are aggressively competing to capture market share in the automobile safety component segment. Similar to TRW, Delphi has 41% of its sales exposure in the European markets. TRW and Delphi Automotive PLC (NYSE:DLPH) are also fiercely competitive in the Chinese market — Delphi already derives a significant amount of its revenue from the Middle Kingdom, while TRW is expanding in the country with nine new manufacturing plants.

However, TRW sports a lower valuation, which Fool blogger Anh Hoang notes is at least partly a result of Delphi’s superior margins. Still, TRW could expand its margins in the future once its major expansion projects wrap up, leaving it free to better leverage its greater scale.

WABCO Holdings Inc. (WBC): Hedge Funds and Insiders Are Bullish, What Should...