Dell Inc. (DELL)’s Opposition Grows, But Is It Enough?

How should investors trade the upheaval at Dell Inc. (NASDAQ:DELL) ? And will this upheaval be enough to convince founder Michael Dell and Silver Lake to up their $13.65 per share offer to take the tech company private? Well the market sure things so–the stock is trading almost 2% above the buyout price. Shareholder opposition to the buyout has been growing, with the two largest outside shareholders, Southeastern Asset Management and T. Rowe Price, publicly voicing their concerns.

I can certainly see why longer-term investors are upset. 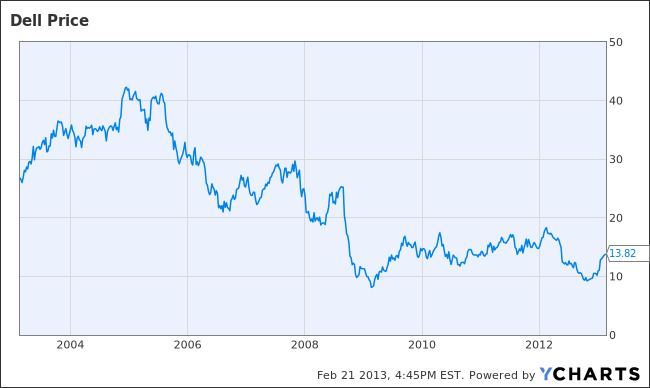 Dell now trades at near multi-year lows, and for investors who bought the stock ten years ago, they have lost nearly 50% of their investment.

Dell’s recent quarterly results showed a drop in both sales and earnings, which does not bode well for investors looking for a boost to valuation. Despite beating expectations, earnings were down 31% from the same quarter a year ago. The decline just further reaffirms the fact that Dell is under serious pressure related to its core PC business. Sterne Agee analysts notes that even with Dell’s initiatives to divest beyond the struggling PC market that “65% to 70% of its business is still tied to PCs.”

This is where things get interesting

So what makes the Dell buyout rejection even possible when founder Michael Dell is the largest shareholder with 14%? The deal includes a so-called majority-of-the-minority voting rights protection, meaning it must be approved by a majority of shareholders excluding Michael Dell’s 14% ownership. With major shareholders, including the top two outside share owners, voicing their opposition for the deal, there is reason to believe that enough support could be garnered to force Michael Dell and Silver Lake to boost their bid.

Here’s how the top five shareholders shake up:

Although Southeastern is a ‘low-key’ activist, they recently teamed up with billionaire activist Carl Icahn to implement changes at Chesapeake Energy. As for Dell, Southeastern believes that Dell could be worth upwards of $24, which they include in their shareholder letter.

Some believe that Southeastern could lose around $1 billion if the $13.65 deal goes through. Sanford Bernstein says the number could be larger. As a result, Southeastern has also put forth an alternative to the buyout, which includes Dell borrowing money to make a major share repurchase or break up the company and sell the units separately.

Another reason the opposition is worth looking into is that T. Rowe opposes the deal, where it is rather unique for a mutual fund company to stand against a management-backed deal. T. Rowe isn’t an activist fund, but they have a name and reputation that could gather more oppositional support. Pzena Investment Management also plans to oppose the deal, as well as Yachtman Asset Management. Another notable firm opposing the deal is Alpine Capital, stating that they expect the final price to be ‘meaningfully higher’ than the buyout price offered.

As mentioned, the deal must be approved by a majority vote not including Michael Dell’s shares. The four major funds that have come out against the deal, including Southeastern and T. Rowe, own 17.2% of Dell’s shares.