Earlier this year, Dell Inc. (NASDAQ:DELL) founder Michael Dell and private equity fund Silver Lake Partners agreed to take Dell private for $13.65 per share in cash. The news sparked a brief bidding war for the company. Meanwhile, several prominent Dell investors complained that the buyout price was too low, even though it stood nearly 50% above the stock’s late-2012 low. 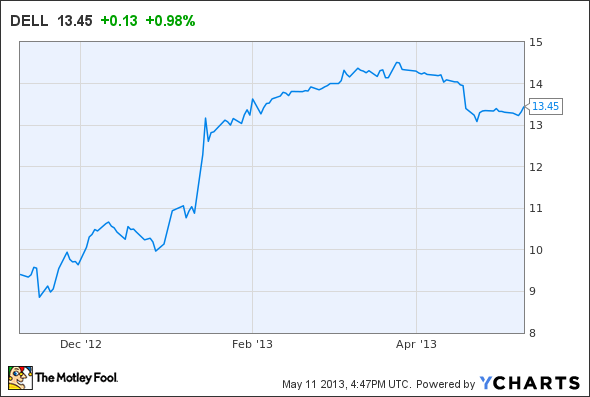 Late last week, Carl Icahn’s Icahn Enterprises LP (NASDAQ:IEP) teamed up with Southeastern Asset Management to launch a competing bid for the struggling PC giant. Under this proposal, shareholders would receive $12 in cash but would continue to own a “stub” stock (with an estimated value of $1.65). Alternatively, shareholders would have the option to decline the cash payment in return for 7.27 additional shares.

Icahn and Southeastern expect 20% of shareholders to take the all-stock option rather than the $12 cash payment.
Based on Dell Inc. (NASDAQ:DELL)’s diluted share count of 1.8 billion, cash payments to the other 80% of shareholders would total $17.3 billion. Icahn’s group states that it can pay that sum while only taking on $5.2 billion of new debt. However, a realistic look at the company’s finances casts serious doubt on that notion.

Raising cash
If Icahn’s group plans to pay out $17.3 billion to shareholders while adding just $5.2 billion of new debt, it will need to find $12.1 billion from other sources. According to Icahn’s plan, this $12.1 billion would come from 1. cash on hand, 2. two additional quarters of cash flow before closing, and 3. selling the net financing receivables from Dell Inc. (NASDAQ:DELL)’s captive finance unit.

At book value, a sale of the financing receivables could generate around $3 billion. This leaves roughly $9.1 billion to be covered by Dell’s cash on hand and any additional free cash flow generated prior to closing the deal.

Icahn estimates the next two quarters of free cash flow at $1.4 billion. However, it is hard to understand how he arrived at this estimate. Dell Inc. (NASDAQ:DELL) generated FCF of less than $300 million in the first half of fiscal year 2013, although the company did manage to produce free cash flow of $1.5 billion in the first half of FY 2012. In light of the company’s deteriorating performance recently, $1.4 billion seems like a very aggressive cash flow estimate.

Available cash
Dell Inc. (NASDAQ:DELL) had $15.3 billion of cash and investments at the end of last year. Assuming the company fulfills Icahn’s aggressive FCF forecast, the company would have $16.7 billion by the end of July. However, not all of this cash is available for payouts to shareholders. Nearly all of Dell’s cash is held overseas, which means that the company would have to pay up to 35% in federal corporate taxes (plus any applicable state taxes) when repatriating it to the U.S. To be conservative, I will apply a 30% discount factor to Dell Inc. (NASDAQ:DELL)’s cash, leaving $11.7 billion available after taxes.