Data production is growing at an enormous rate. Almost everybody owns a desktop, laptop, smartphone, tablet, and maybe an Xbox or smart TV. All of these devices consume an incredible amount of data.  Each day terabytes upon terabytes of data are requested, published, and transferred around the internet; and, in the coming years this data is only going to grow. We have also seen the decline in some of the primitive technologies that brought the internet to where it is today. The desktop, for one, is on its way out. But that doesn’t spell an end for one of the largest PC manufacturers in the world, and I am going to tell you why.

The PC to tablet transition: The end for the desktop

Ever since the debut of tablets with the iPad back in 2010, consumers have been transitioning from the clunky black boxes underneath their desks to sleek and portable tablets. Tablet sales grew 400% in 2012, while PC sales only grew 1%.

The data that these tablets process every day however, is far more than their desktop counterparts ever did. With Facebook, Twitter, movie and video instant streaming and people having a specific app for everything, it is only easier to access and create new data now than it ever was before.

Why the companies that currently make PCs will still thrive

The uptick at the beginning of 2013 after the steady downfall shows already how HP’s new business model will reap benefits in the future. 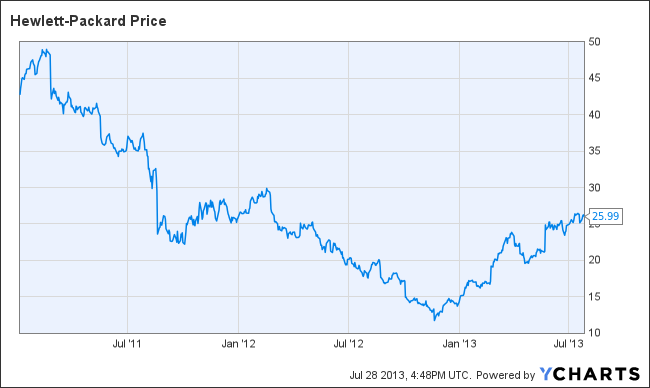 How they will thrive

There are over 2.5 billion internet users, and 634 million websites that have to serve content to those users constantly and continually. There are also millions of apps that request and send data that is sent over the internet. With more and more devices such as smartphones being sold every year, there is only going to be more data going through the internet as everybody is now connected to everyone else. All of this data is sent through the internet and either stored or processed by servers.

As more and more data is being processed and stored, more and more servers will be needed. And with an established foothold in the server market, HP, IBM, and Dell Inc. (NASDAQ:DELL) have recognized that this is a market that they can now dominate.

Hewlett-Packard Company (NYSE:HPQ) holds the number two position in sales for servers in 2012 with around 30% of the revenue share, with International Business Machines Corp. (NYSE:IBM) holding the first spot and Dell Inc. (NASDAQ:DELL) in third (IDC Worldwide Quarterly Server Tracker).

Is IBM, HP, or Dell the better stock?

HP’s proprietary blade system will help to bring them to the top of the enterprise market. Their thin client servers are perfect for small and medium businesses, and are reasonably priced for today’s small budgets.

The real game changer though is the release of HP’s new Moonshot system. The Moonshot system uses 89% less energy, 80% less space, and costs 77% less to buy and run then comparable International Business Machines Corp. (NYSE:IBM) and Dell Inc. (NASDAQ:DELL) models. This could potentially revolutionize the server market and cause both IBM and Dell Inc. (NASDAQ:DELL) to attempt copying this idea for their own uses.

However, both IBM and Hewlett-Packard Company (NYSE:HPQ) saw a decrease in revenue from 2011 to 2012 of 4.3% and 7.5%, respectively. Dell Inc. (NASDAQ:DELL) saw an increase of 4.5% in that same time period. In 2012 these three companies held 75% of the market share for servers, meaning that any dip in server sales as a whole could significantly affect any of these companies.