When it comes to agricultural equipment, it’s hard to find a better-known name than Deere & Company (NYSE:DE). With its trademark green-and-yellow tractors and other farm machinery, the company has made the most of its John Deere brand, but after a run-up that sent John Deere stock close to all-time record highs earlier this year, investors wonder if recent weakness in the commodities sector could point to a reversal of fortune for the company.

Last year, the worst news for Deere & Company (NYSE:DE) came from the weather. Bad drought conditions throughout much of the U.S. led to two consecutive earnings misses during the July and October quarters, as many farmers found themselves without any crops to harvest and therefore didn’t need to order equipment from Deere.

Since then, Deere & Company (NYSE:DE) has responded with more positive earnings results in the past two quarters. Yet even in its most recent report, Deere reduced its guidance for full-year-revenue growth by a percentage point, with expectations of just 5% growth in sales for the year.

One rival that Deere & Company (NYSE:DE) will have to treat much more seriously now is Kubota Corp (ADR) (NYSE:KUB), a Japanese company that also makes farm equipment. For years, Kubota Corp (ADR) (NYSE:KUB) suffered from an ever-strengthening yen, which hurt its ability to remain competitive in exporting its equipment to foreign markets. But with the recent plunge in the yen’s value, it’s Deere & Company (NYSE:DE)’s turn to have to deal with currency-related headwinds, while Kubota will be able to boost its profit margins and make its products more competitive in other countries.

Kubota isn’t the only company aggressively challenging Deere. AGCO Corporation (NYSE:AGCO) has made aggressive expansion efforts in Africa, working with specialty agricultural lender Rabobank to try to help farmers on the continent buy more farming equipment. Moreover, both AGCO Corporation (NYSE:AGCO) and CNH Global NV (ADR) (NYSE:CNH) have made emerging markets like Latin America a high priority, reaping benefits from the more rapidly expanding economies among Latin American nations. Deere has targeted Latin America as well, but it hasn’t been as aggressive with its international efforts as its peers. Deere’s stock price has reflected its lack of initiative in expanding globally: 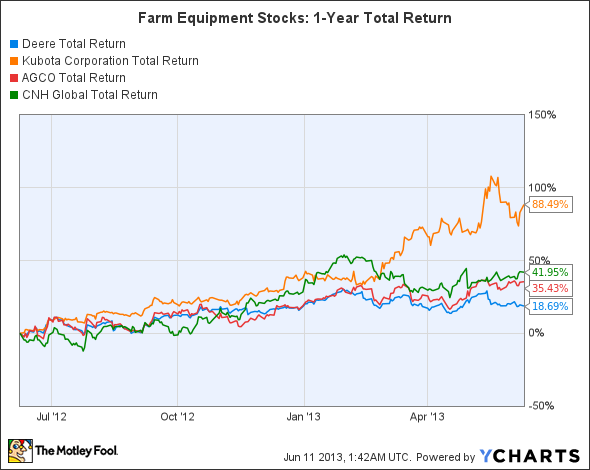 Perhaps the biggest threat to Deere, though, could come if crop prices start to drop. For years, farmland has gotten increasingly expensive, and rising food prices have benefited the agricultural industry even as it has created new challenges for populations around the world, especially in less prosperous areas of the globe. But with some pointing to an imminent shift in the general upward slope of commodities prices more broadly, Deere could be among the first companies to suffer the second-order effects of a slowdown.