In the 14 years between its creation in 1990 and 2004, AGCO Corporation (NYSE:AGCO) set out on a mission to become one of the largest agriculture equipment suppliers in the world. During that time, the firm merged with and purchased 20 companies, spending about $2.5 billion, representing 4% of sales. After 2004, the company only bought two firms, and spent just $86 million.

Why should I care?

Well, the company went on a shopping spree for years; with each swift step from one purchase to the next, it came a little closer to securing enough footing to take on giants Deere & Company (NYSE:DE) and CNH Global NV (ADR) (NYSE:CNH).

The lack of buying activity since 2004 shows that the firm feels comfortable in its position to take on the top dogs, and it will likely continue to make operations more efficient. But in order to know if the company is gaining market share, we need to take a look at comparative revenue increases. 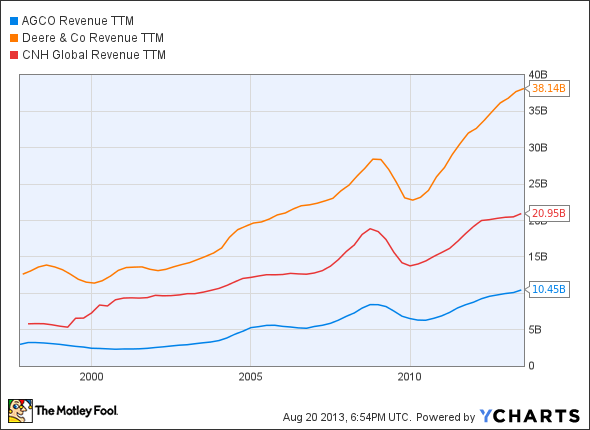 But what has it done for me lately?

While these stats show AGCO Corporation (NYSE:AGCO)’s ability to go from being a small-cap company into a top player in the agriculture equipment industry, it doesn’t provide much of an idea about what the firm can do while it is on top. After all, it is much easier to double up on $300 million than it is to double up on $10 billion. A more informative comparison is what the company has done since finishing its buying frenzy in 2004. 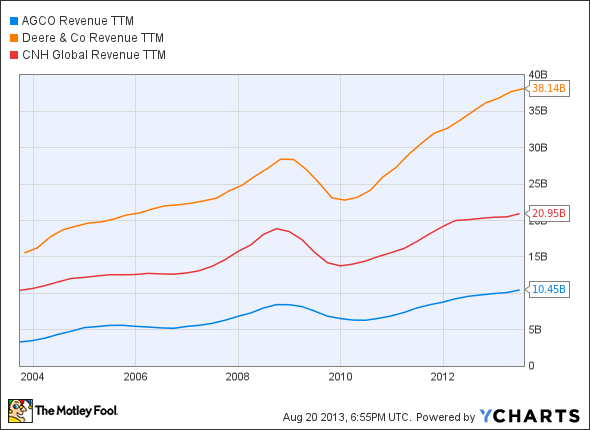 AGCO Corporation (NYSE:AGCO) increased annual revenue by about 215% from 2004 to now. Deere & Company (NYSE:DE) increased it by 246% in the same period, while CNH Global NV (ADR) (NYSE:CNH) increased revenue by 100%. Again, we see that AGCO is not keeping up with Deere’s revenue increase, but it is beating CNH. This evidence begins to tell the picture that at the current pace, AGCO will take the second spot away from CNH in the years ahead. That makes me want to buy AGCO Corporation (NYSE:AGCO) and sell CNH Global NV (ADR) (NYSE:CNH)… but hold on.

Did you forget about costs?

As a matter of fact, I didn’t. Revenue is great, but if the cost of generating it is too much, a company can go bankrupt very fast. The amount of money the firm is actually earning through profit margin can better tell the story about which is the strongest. 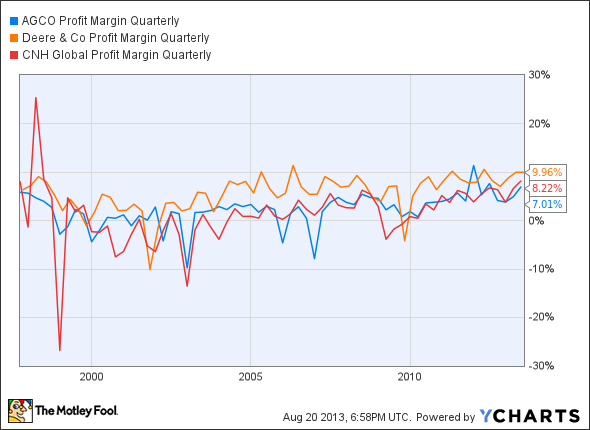 This chart shows that each company experienced similar fluctuations during the same quarters, and steady profits for all indicate that each firm can afford its revenue. But what I find the most interesting about this chart, is the frequency by which AGCO posted positive returns after 2004 compared to before that year, which is when it ended its buying frenzy. That means that as AGCO’s operations have become more integrated, and the company has stopped spending a considerable amount on mergers and acquisitions, it has managed to keep a higher percentage of revenue.